Is it a Manager's Job to Come Up with Answers? 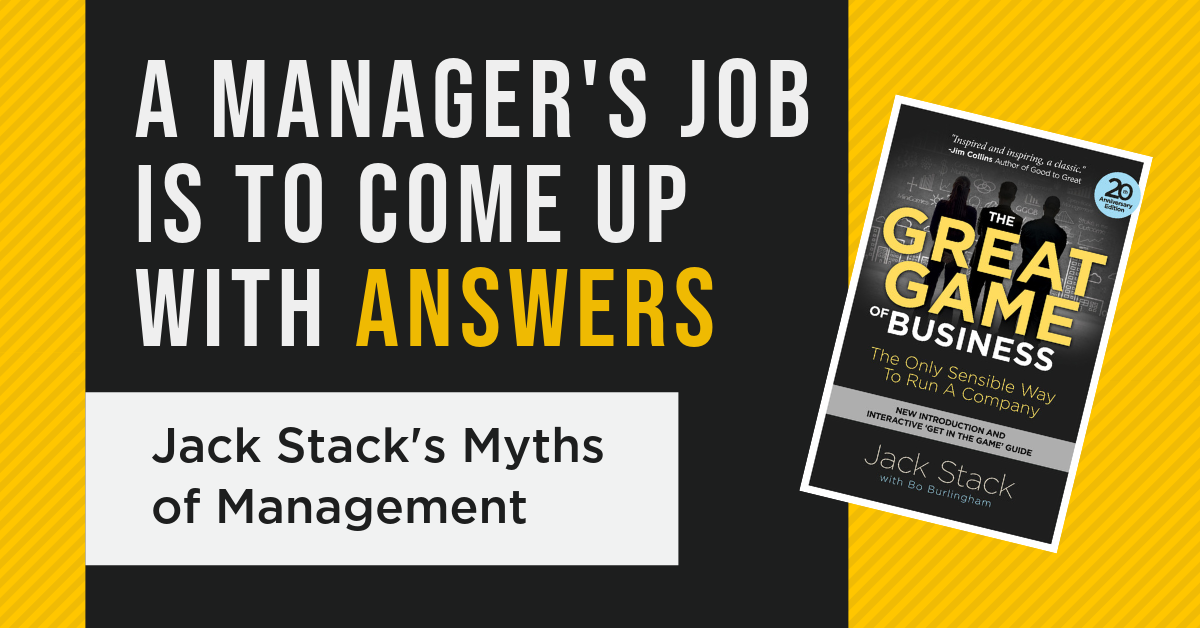 It's very common for managers, especially new managers, to think they're supposed to have solutions for any problems that arise on their watch. That kind of thinking can get you into deep trouble. For one thing, it sets you up to fail because no one has all the answers. For another, it undermines your credibility because everyone knows that no one has all the answers. It also isolates you from people. A big pitfall of managers at all levels is the notion they have to be perfect. I know supervisors who can't hold a meeting because they're afraid someone might ask a question they can't answer. As I mentioned earlier, I know CEOs who can't leave their offices unless their ties are straight and every hair is in place. Managers like that wind up hating their jobs. They feel they have to live up to an image, to be an idol, to be a representative of a position.

At the same time, they're failing as managers, because they aren't doing what every good manager has to do: build confidence in other people. To do that, you have to show people you're human, you're not God, you don't have all the answers, you make a lot of mistakes. You send the wrong message if you try to be perfect, if you always want to solve the problems yourself. You're much better off sharing problems, using the people you work with to come up with solutions.

That's another lesson I learned at Melrose Park. At one point, I remember, the truckers went out on strike and shut down the highways. We couldn't get steel delivered from the U.S. Steel plant in Gary, Indiana, because snipers were shooting at the trucks. You need steel to build tractors. If we didn't get the steel, people would be sent home-they wouldn't get paid, they couldn't put food on the table. I was in charge of making sure we had the steel we needed, but I didn't have the faintest idea how to get it past the snipers.

So I brought five of my guys together, and I told them this one really had me in a bind. How were we going to transport two tons of steel from Indiana to Illinois without getting our heads blown off? Someone said, "School buses. They wouldn't shoot at school buses, would they?" Another guy said, "It depends who's driving the buses." Someone else said, "They wouldn't shoot at nuns driving school buses." That's exactly what we did: we rented a school bus and dressed guys up as nuns. They pulled into the steel mill, loaded the steel bars into the school bus, and drove the bus back to Melrose Park. We were always doing crazy stuff like that to keep the lines running. Nothing stopped us. We came up with the most outrageous things you ever heard of, and they usually worked. I didn't come up with the answers. We all did.

That's what I mean by sharing problems. It's a shared learning experience. It's a way of teaching each other. You all learn faster when you can teach each other. In fact, I learned a tremendous amount from those experiences. Aside from sharing problems, they taught me about the importance of managing with the downside in mind, of having contingencies and trapdoors. Because failure is part of the process. You can't succeed if you don't fail sometimes. But if you're not prepared for failure, it's going to take you by surprise and knock you for a loop. So you have to manage with the understanding that things may not work out according to plan. You have to have your strategy backed up.

The secret is to make contingency planning a habit of mind. It was a habit I developed as I moved up the ladder and found the problems kept getting harder. I would teach people everything I knew, and it wouldn't be enough, so together we'd have to come up with one more trick. I learned I could respond better if I already had a fallback position, an idea about what to do if the unexpected happened. Maybe it was just a plan to call certain people together, people I could share the problem with. But at least I wouldn't be shocked, I wouldn't freeze, I could spring into action.

That was critical because the people in the factory were depending on us. When you have the responsibility to take care of other people, you do whatever it takes to get the job done.

You drop everything else. You stay night and day on that one thing. You figure out how to motivate, push, sneak, threaten, do whatever is necessary because people's livelihoods are at stake. Take the hill. You gotta take the hill.

You do that, not by coming up with the answers yourself, but by generating a level of creativity that allows the answers to come out. And there's nothing like a challenge to make people creative. What really turned us on was the thrill of doing something nobody thought we could do. We could see that most people gave up too early. They stopped before they got to the finish line. They did that throughout their lives, and that's why they got stuck in a rut. I began to realize that one thing a manager could do was to help them get out.

What makes a good leader? Check out these tools for your leadership and management teams and stay tuned for more on the five Myths of Management.