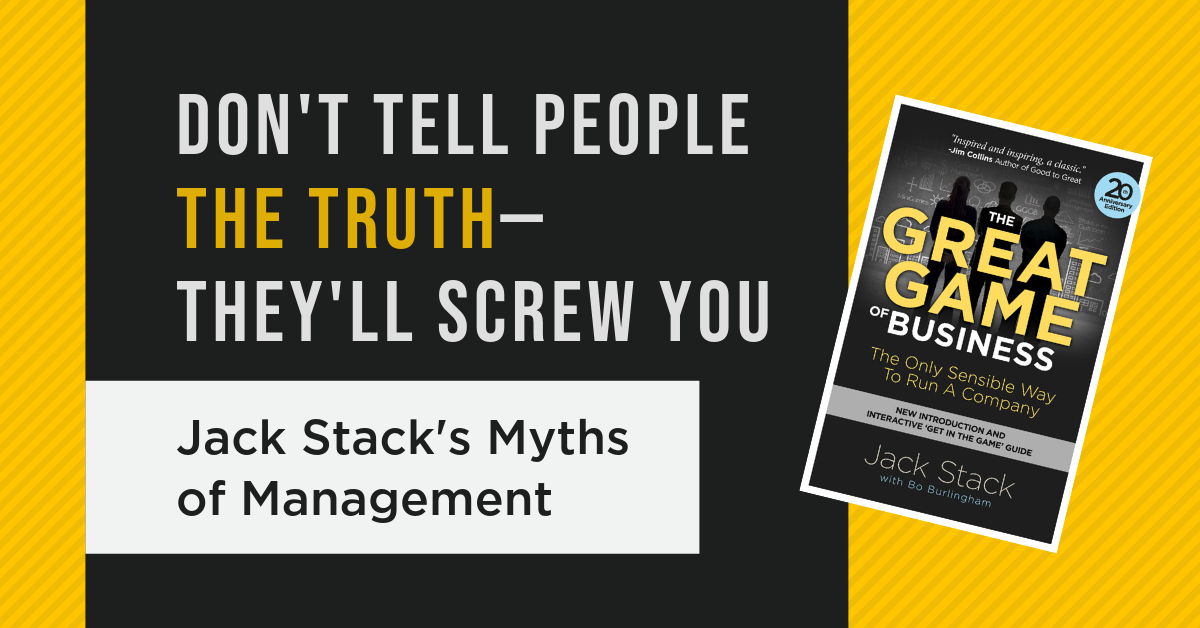 You may wonder if it's possible to play the Great Game of Business anywhere—in a division of a giant conglomerate, say, or in a factory with a dominant union, or in a company that doesn't share equity with employees or have an intelligent bonus system for employees. In fact, The Game started in a place exactly like that, in a very small department at the huge International Harvester plant in Melrose Park, Illinois. It was there that I learned most of what I know about managing, and everything I've tried to forget about leadership.

Melrose Park was one of the toughest plants in the country in the 1970s, when I worked there. We had racial incidents, death threats, burning effigies, bombings, shootings, aggravated assaults-you name it. Workers and managers were constantly at each other's throats. There were two or three walkouts a year-when things were going well, that is. In a bad month, there might be two or three work slowdowns as well. Every time we turned around, we heard another rumor that the factory was going to be shut down because of labor problems. Let me tell you, we had more than our share of losers. I know. I was one of them.

My father, who was a foreman at Melrose Park, had gotten me a job as mailboy in the purchasing department. I was nineteen at the time. I'd already been kicked out of college and a Catholic seminary for disciplinary reasons. I'd lost a job at General Motors for playing poker on duty. I'd flunked my army physical because of an accident I'd had-someone had thrown me through a plateglass window. Having been rejected by the church, academia, the military, and G.M., I figured Melrose Park was my last chance.

For reasons I still don't understand and can't really explain, it turned out to be the ideal place for me. I wound up having ten jobs in ten years, by the end of which I'd had a pretty good education in management. People came up with a slogan for me: Have Shovel, Will Travel. Whenever there was a mess that had to be cleaned up, they would put me in the middle of it and let me dig my way out. The odd thing was that I often found I'd had a hand in creating the mess in the first place. I'd do something in one job, and I wouldn't even be aware of the effect it was having until I got my next assignment. Then I'd have to undo the problems I'd helped create. But I did learn how to get things done. I did that mainly by ignoring most of the advice people gave me about how to be an effective manager. The practice of management, I discovered, is filled with myths that are guaranteed to screw up any factory or company as badly as Melrose Park was in those days. The real secret of an effective manager is to learn how to ignore them. You have to ignore them if you are going to get people to play the Great Game of Business.

Being honest with people was unheard of at Melrose Park and at most other companies in the 1970s. The whole mentality was, "cover your ass". If your job was to get parts, you never told your suppliers how many parts you really needed, or when you really needed them, because they'd screw you every time, or so the experienced schedulers told me. They said, "Lie, kid, lie. If you've got enough parts to last you a couple weeks, tell 'em you'll be out of stock by Friday." It got to the point where nobody trusted anyone else's numbers, and for good reason. They were all lying to one another to cover their asses.

But I had an advantage: I didn't need to cover my ass. I didn't have a family. I didn't have any responsibilities. So when suppliers asked me what the situation really was in the factory, I told them the truth. I told them exactly how many parts we had in stock, and how long we could go before we'd start having problems on the assembly line. I discovered that the more honest I was with them, the more they relied on me. They had their own scheduling problems, and they were desperate for information they could count on. As a result, they protected me. I was their source, and they made sure they never let me down.

The same thing happened when I began dealing with people on the shop floor. There we had a situation where nobody believed the schedules they were given because, once again, everybody was covering their asses. Let's say the schedule called for the assembly line to make fifty Model X engines and fifty Model Y engines on a given day, but the people on the line didn't have enough parts to fill the quota for the Model Xs. Instead they'd do two days' production of Model Y. That way they kept the line up and running, which meant their asses were covered, but they totally discombobulated everybody else, who now didn't know what the line needed or when. So I went to the guys in assembly, and I said, "Look. From now on we are going to live by the schedule we put out, and we're going to schedule from the assembly line all the way back. If a part isn't here when it's needed, we're not going to make do with the parts we have. We're going to shut down the line."

Everybody was shocked. They said, "You can't do that. The assembly line is god. You can't shut it down." I said, "Oh, yeah? Just watch me." As it turned out, I only had to shut it down once. After that, people got in sync real fast. They decided that if I was willing to shut down the line to give them a schedule they could count on, they'd make sure they got parts there on time. As for me, I made sure they had everything they needed to meet the schedule. If one department got in trouble, we'd send other people in to help out. Sure enough, our production began to go up. When I started the job, we were doing about 100 engines a day. By the time I left a year later, we were up to 300 engines a day.

We established credibility, and you only build credibility by telling the truth. You simply can't operate unless people believe you and believe one another. That taught me an important lesson, lying and dishonesty are bad business.

Implement the Great Game of Business using our Do-it-Yourself Course, Get in the Game.