When the Virus Hits Close to Home - A Tribute 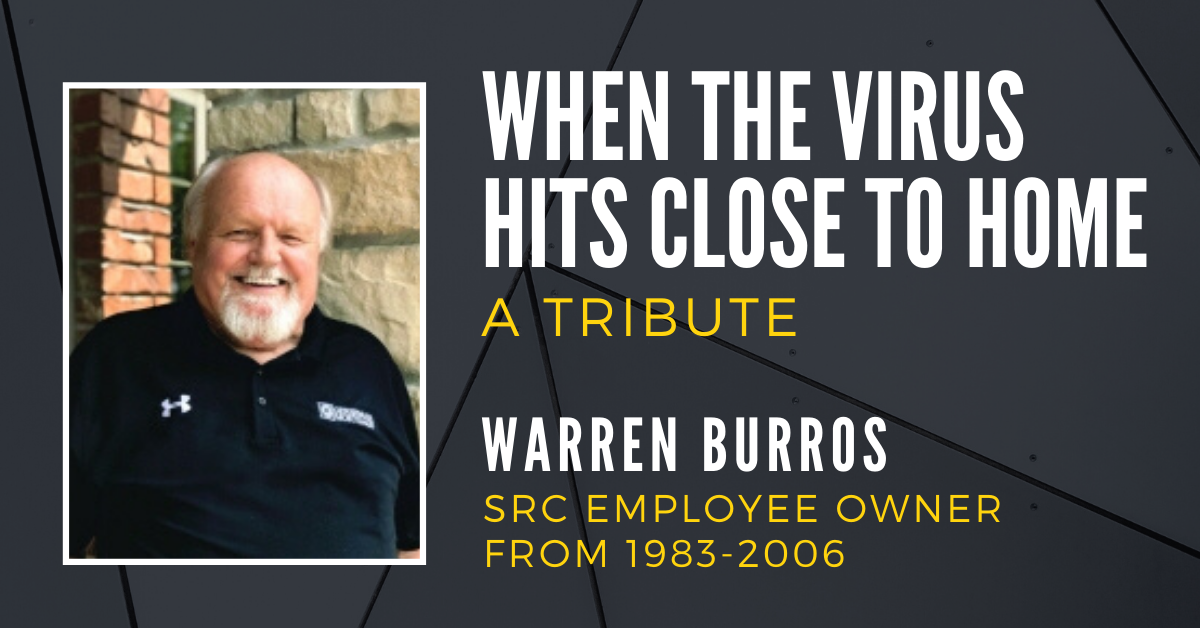 Even on days when there might be a glimmer of hope in turning the corner on this pandemic gripping our country—when it seems like we might actually be flattening the curve—bad news can hit in an instant.

We learned on April 8, we lost one of our own. Warren Burros, a longtime Springfield Remanufacturing Company associate passed away after battling Covid-19. Warren was part of the SRC team right from our start in 1983 and was with us until the day he retired in 2006 at the age of 65.

I heard Warren had fallen ill with the virus, but he was reportedly recovering. This virus is so vicious. My thoughts and prayers go out to Warren’s wife, his family, and his friends.

If he’s listening, I want to take this chance to thank Warren for all his contributions to SRC over the years. Perhaps more importantly, I want to thank him for everything he accomplished in his second career as a credit counselor, where he applied the financial literacy lessons he learned playing the Great Game of Business® to help thousands of people get out of debt and to put their financial lives back together—a calling he took very seriously.

My hope is that all of the people Warren helped over the years might be in a better financial position to weather the crisis we are all now trying to survive. That’s what we call the Ripple Effect; the more you give, the more you get. Now is the time Warren’s work matters the most.

To honor Warren, I’d like to share the story that Darren Dahl and I wrote about in our book, Change the Game. Warren was so proud of his turnaround story, and he wanted to share it with others.

He was someone who used The Game to help get his own financial affairs in order before paying those lessons forward by serving others. As our nation struggles through the impact of this virus, maybe Warren’s story can be an inspiration to someone you know as well.

The following is an adapted excerpt from Change the Game:

Warren and his wife have dinner out on the town most Friday nights. A night out is a treat for Warren, who retired in 2006 after working thirty-one years at our company. There were many years when he didn’t have the money to go out to eat at a nice place, let alone pay his rent, because he couldn’t manage his money.

When he first took the job at SRC, in 1983, he thought, because he had dropped out of high school, he was lucky to land a gig paying $6 an hour. But he quickly found out that his wages didn’t stretch far, especially when it came to feeding his family.

It seemed no matter how hard he worked, or how many overtime shifts he volunteered for, he couldn’t get ahead. It was as if his checking account had sprung some kind of leak he didn’t know how to plug. It helped that his wife had a good job, which kept them afloat.

That all changed when Warren’s wife was unexpectedly laid off. After that, Warren’s life was like trying to hold on to a greased pole. The more the past-due bills began to pile up, the less Warren slept.

He still clocked in to work every day, but he had begun to rack up a whole slew of demerits for being late and screwing up on the job. He led the company in wage garnishments. He had reached the bottom of the barrel and was close to losing the job he couldn’t afford to lose.

At that time, he worked in one of our warehouses. It was his job to maintain the inventory of parts and pieces the other guys and gals on the assembly line needed to turn greasy, worn-out, combine engines into remanufactured products that we then sold to farmers.

Warren had been with the company while we were still part of Harvester, which helped breed feelings of distrust about the management of the company. Even after we had made the transition to owning the company ourselves, Warren remained a doubter.

He figured we kept a set of books that was different from the one he saw. He thought we were simply doing what business leaders do: skimming plenty for ourselves. He also didn’t think much of this "ESOP thing".

He was skeptical that the company didn’t take anything out of his paycheck to give him a stake in the company. He felt that because his shares were worth so little, the whole thing was a joke.

Then, during his darkest days, something changed for Warren. As he sat in the Huddle and saw his peers talking through the company’s income statement, balance sheet, and cash flows, something hit him like a flash of lightning.

He suddenly saw that inventory, the stuff he managed every day, was really just cash. His cash! For all those years he had been working in the warehouse, he hadn’t realized that inventory was valuable, the fuel the business ran on. But if the company had too much or too little inventory, it lost cash.

It was his job to find the sweet spot, the just-right amount that would propel the company like a rocket ship. And when he could do that—bam!—that number on his ESOP statement could begin to mean something special. It was a moment of transformation for Warren: he realized he could make a difference.

At that turning point in Warren’s career, he began to trust. He went from doubting to leading. He transformed from being an employee to becoming an owner. Warren also brought back home with him the skills he was acquiring in running a business.

He and his wife began to put a plan together to get out of debt, using those dinner dates as meetings to go over their long-term financial plans. He even got a job at our company for his son, who still works there today.

Thanks in part to his shares in the ESOP, Warren was able to retire debt-free when he turned sixty-five. Soon to turn eighty, he now lives with his wife in a nice home on five acres they own outright.

While they could certainly afford to go out to eat every day of the week, Warren and his wife keep it to once a week. They remember what it was like to go hungry. They also still make the most of their time by treating their night out as a Huddle, a chance to go over their budget and forecast their week ahead. Apparently, old habits die hard.

But that’s not all. Even after he stopped working, something about The Game stuck to Warren like an itch he couldn’t scratch. This system had changed his life; it had saved him. He wanted to find a way to pay it forward. So he did.

Warren went back to school to become a certified credit counselor. When I learned about this, I couldn’t believe it. After all, this was the guy who was always out of money. But when I asked him if he was kidding me, Warren put me right in my place. “Who better than me to teach these lessons?” he asked me. He was right.

He had learned the hard way to climb out of debt, which he could turn into a powerful case for avoiding debt in the first place. Debt is the ugliest place to be in, no matter if you are a young person in college or an older person trying to enjoy the golden years of retirement.

As a certified credit counselor, Warren now helps folks balance their own budgets and understand what they need to do to own a house of their own. He teaches up to four hundred couples a year to build scorecards and track their progress on achieving the same kind of financial freedom he earned, thanks to deciphering the secrets of building a great business.

“One of the key lessons we learned on the job by playing The Game was to identify and prioritize our weaknesses and improve upon them,” Warren told me.

“Every year we would create a bonus plan around our biggest weakness. Eventually I realized that those lessons also applied to my personal life. Once I learned the basics of monitoring the income that was coming in compared to what was going out, to watch the ebb and flow of the money, it changed everything for me. It allowed me to come up with a plan and to execute on it.

“When I got my first ESOP statement, it had probably 50 cents in it. But toward the end, it was incredible. The money from the ESOP helped me build up my counseling business into a lucrative living. I make more money now than I did when I was working! The lessons I learned at SRC allowed me to go to another level. It’s an incredible opportunity for a working person to take himself to another level that he will benefit from for the rest of his life. I finally found freedom.”

Godspeed, Warren, you will be missed.