There's No Shame in Trying To Save Your Business 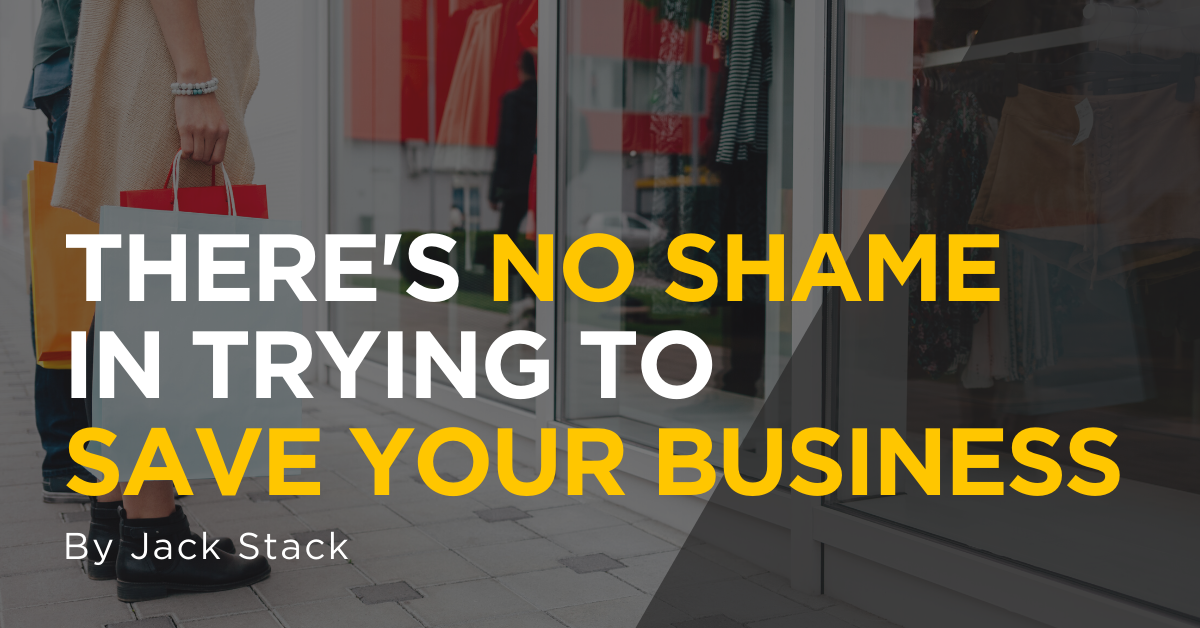 A few days ago, I received a frantic call from a small business owner. This entrepreneur, who I’ll call Molly to protect the innocent, runs two retail shops. Like many similar brick-and-mortar businesses around the country, she had seen a dramatic drop in her sales over the past few weeks.

Now, things were about to get worse; a lot worse. The state was mandating all retail shops like hers—along with restaurants, cafes, and other “non-essential” businesses—shut down to avoid spreading the coronavirus.

Molly was beyond scared. Of course, she wanted to do the right thing and keep her people and her customers safe. But, by doing that, she wasn’t sure how she would pay her credit card, her rent, her banker, and her vendors.

Worse, she wasn’t sure what would happen to her dozen or so employees—some of whom had worked with her for years.

With both of her shops shut down, she’d have to lay off her team. But even if they could collect unemployment, she was worried sick it still wouldn’t be enough to support them and their families.

I could tell from her tone of voice she was paralyzed; there was too much to think about. She couldn’t decide what she should do first. Instead of having 12 balls in the air, she needed to focus on catching just one.

There are a lot of entrepreneurs like Molly out there today. I feel for each and every one. For some of them, like Molly, this is their first economic downturn. They don’t know what to expect.

The crazy thing is, I've spoken with other leaders whose businesses are booming right now—especially if they make things people need during a pandemic. While it might be a temporary glut caused by panic buying or hoarding, it’s still an unforeseen challenge to overcome.

Stop - think - and review the numbers.

Molly’s business had come to a dead stop. She told me she was thinking of drawing on her credit line, taking on more debt so that she could pay all of her bills.

“Hold on Molly,” I said. “That’s your last resort. What does your payroll look like?” She told me it was about $9,000 a month. “OK,” I said. “That means you need about $18,000 to pay your people for the next two months of this crisis. Your first step is to figure out where that cash is going to come from.”

It turned out that Molly had about $9,000 left in her bank account; one month of payroll. That was a good start.

My next question for Molly focused on her inventory—which she estimated to be worth about $100,000. I encouraged her to think about how she could sell some of that stuff and generate cash—which would buy her another month of payroll and a little more breathing room.

I told her that she and her people would have to get creative and try new things, like finding ways to promote and sell her stuff online. The more stuff they sold, the more money Molly would have for her people.

With the mandatory shutdown looming, it meant she needed to consider bringing as much of her stuff home as she could and store it in her garage or basement or wherever, then figure out how she could ship it out from there to her customers.

Be honest and tell it to them straight.

In the meantime, I told her if any of her creditors called—her landlord, her banker, or her credit card company—she should politely tell them that she wasn’t in a position to pay them anything at the moment. Her shop was shut down.

“But wait,” she said. “What if they see I’m running promotions and trying to sell things online? Won’t they know I’m still in business?”

“Look,” I said. “You simply tell them that you're doing whatever you can to generate cash. But you’re still shut down and you can’t pay them right now.”

This is an important lesson that I’ve learned from living through four economic downturns: You don’t have to be embarrassed about saying you can’t pay. You also shouldn’t be intimidated by the people you owe money to.

I totally understood where Molly was coming from. She wanted to do the right thing. But in this case, the right thing was making sure she could protect her team by making her payroll. And to do that, she had to have the courage to tell other people she couldn’t pay them.

Focus on one thing at a time.

This was all about surviving to fight another day. But it was also about focusing on one critical number at a time—to worry about catching one ball instead of dropping all 12. And in this case, the ball she needed to catch revolved around  generating and preserving cash.

Fast forward a few days. I called Molly to check on how she was doing. I immediately noticed a change in her tone. She was more relaxed and in control. She told me she was sleeping better. Because she had found a short-term goal she could act on—selling her inventory—the panic was gone.

She told me how her associates came together to find some incredibly creative ways to get the word out to their customers, like creating a video where they explained what was happening to their stores.

The video was even picked up by several of their local TV stations. They made themselves vulnerable and asked for help—and their customers responded. Big time.

Molly’s story really hit home for me because it speaks to the power of being willing to be transparent—to be truly open-book—with people (including customers), especially in the toughest of times.

People are positive and kind when someone is brave enough to be vulnerable. I think too often we worry about the possible 5% of bad apples  out there rather than the 95% of people who will step up and help us out.

It’s also a lesson in how scarcity—when we don’t have things—is when innovation, creativity, and entrepreneurship really explode.

With more cash on hand, Molly was able to think about the future and what she might do next depending on how long it takes for the economy to rebound back to normal.

Start planning for the future.

No, it wasn’t a time to invest in new inventory just yet. Rather, we talked about how, if she could continue to build up her cash reserves to the point where she had more than three months of payroll saved up, she could begin calling her creditors and offering to pay them something of what she owed them.

Otherwise, she might go bankrupt. At a minimum, she should ask to renegotiate her deal to get more favorable terms.

Why would anyone agree to do that? Because there are a lot of small businesses like Molly’s who won’t be able to pay anything in the coming months if they aren’t taking aggressive action to protect their cash like she is.

At the same time, I know of some landlords who have been giving their small business tenants a break, telling them they don’t have to pay anything for the next 90 days. These are the first people you should find a way to pay when you’re able to.

Research your options and ask for help.

Molly and I also talked about the different options now becoming available from the federal and state governments, as well as the Small Business Administration. She needs to have knowledge around what help might be available for her business—especially if the recovery takes longer than a few months.

For example, will she be able to tap low-interest loans that could be forgiven if she manages to successfully avoid layoffs? What other kinds of resources might she be able to use to help keep her business afloat? And, unfortunately, she also has to understand what it might mean for her people if she was forced to lay them off at some point.

The good news is that Molly is in a much better position to tackle that kind of homework than she was the week before.

Remember, we're all in the same boat.

If you find yourself in a position like Molly, just remember it’s not your fault. There’s nothing to be embarrassed or ashamed about. This is the time to stand up, take action, and then start to build your plan to get ahead.

If we can all do that together, we’ll come out of this crisis stronger than ever and ready to take advantage of the upturn when it inevitably arrives.