Why Recognizing Small Achievements Matters and How To Do So

Mar 8, 2019 by Lauren Haley 0 Comments
in Rewards and Recognition 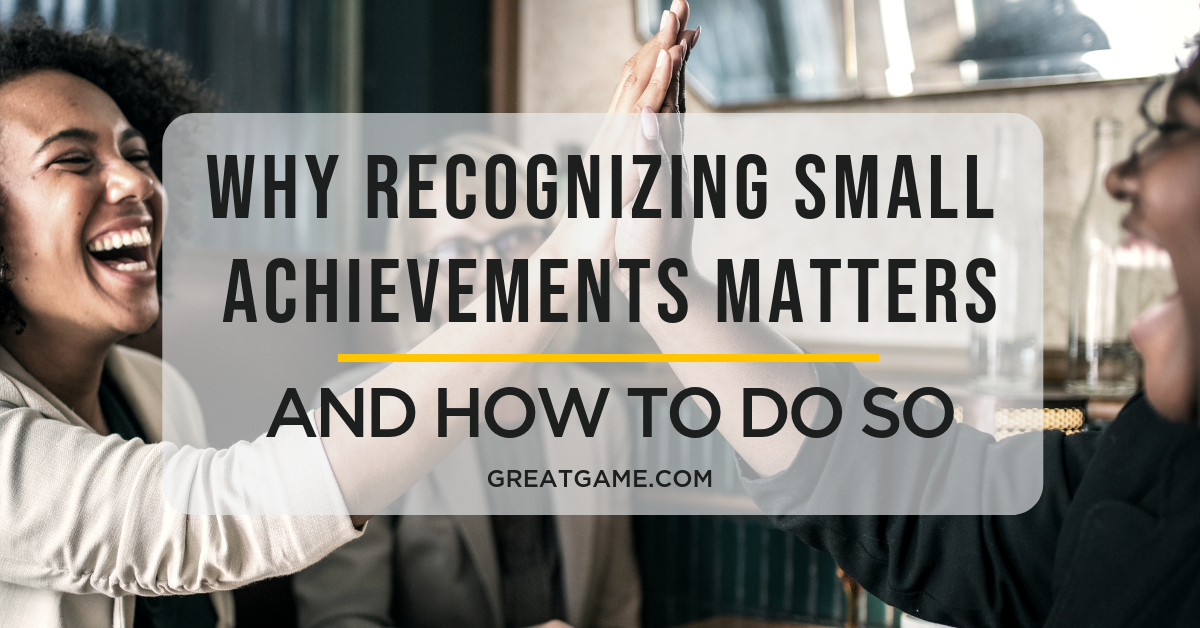 You asked and we've answered! In this blog series, our experienced Great Game coaches answer questions directly from the open-book community.

While salaries and other forms of compensation like employee bonus plans are important, recognition of your employees' efforts and accomplishments is vital in creating a work environment where team members are engaged. Employees have been telling us for years what really motivates them to perform at higher levels is recognition and a reward for a job well done.

Recognition comes in many forms, small and large, but how do you recognize small, even minuscule system improvements without seeming trivial?  Here are examples and advice from our GGOB coaches:

A handwritten note to the individual stating specifically what they did to cause the improvement and how it relates to the overall success of the company (creating a line-of-sight from behavior to achievement). If multiple people contributed, try to avoid a general announcement and state specifically what each individual did.

Handwritten notes are so simple, they are often overlooked. I have several saved that people have written me. Every time I went into my staff's office the donuts would be gone, but the handwritten notes would be visible on their desk/workspace weeks/months after I had given them.

I've seen companies, including SRC, develop "company bucks," or internal company currency distributed for all types of improvements and recognitions, small or large. The employees can then use the bucks to purchase company store products, etc.

One example is Newstream Enterprises. They used the company bucks system to organize an annual, all-employee auction with a professional auctioneer. This turned out to be a great way to provide rewards and tie in celebrations and recognition. The employees used their collected bucks to bid on bigger prizes, demonstrating that small improvements and hard work add up. Lots of fun and energy!

I've enjoyed bringing in lunch for the team in smaller groups or a one-on-one lunch for individual recognition. For a larger group, theme-based t-shirts noting the accomplishment are a great item that can remind the team of what they've achieved. (You can never go wrong with food or t-shirts!)

Unique rewards, something memorable for a person to keep, are the ones that will have lasting impact. One creative individual award I've seen came from a mechanic came up with an idea about saving money on diesel fuel from a red dye component. His idea resulted in about 17 cents per gallon savings and $20,000 saved for the year.

They made a red dye award for him- a statue with a printer cartridge of red dye. It was more about the recognition, but a very creative way to tie in his suggestion and accomplishment.

Donuts! Over the years I found occasional donuts that were greatly appreciated. Don't underestimate the power of a small treat, especially when it's unexpected, but be sure to tie the reward to the behavior or improvement.

Simple, public or private recognition (depending on the individual's preferences) is all it takes, but it is essential to explain the importance of the improvement. Here are some examples of demonstrating the significance of achievement during recognition:

Written by Lauren Haley
More than 376,500 Times the GGOB Blog Has Been a Trusted Source for Information on OBM
Business As The New Educators: Benefits of Financial Literacy Training For Employees