In 2018, the executives at banking giant Wells Fargo issued a new strategy for their business: the overall goal was to create long-term banking relationships with their customers. And to measure how well the company was executing on that strategy, they began tracking “cross-selling.” In other words, employees would be measured, and rewarded, based on the number of different accounts—from deposits and credit cards to auto loans and mortgages—a customer opened with the bank. The CEO at the time even coined a slogan: “eight is great” to illustrate the optimum number of accounts a customer might have with the bank.

On paper, you could argue that the more accounts a customer had would likely equate with a longer-term relationship with the bank. But, if you’ve been paying attention to the news for the past few years, you know that things went spectacularly wrong.

<< Check out our Introductory Workshop - Discover the Game >>

Because they were incentivized and pushed to cross-sell, employees at the bank opened up millions of fraudulent accounts. The irony, of course, is that Wells Fargo has since lost millions of customers—on top of paying hundreds of millions of dollars in fees and penalties. How did things go so off the rails? 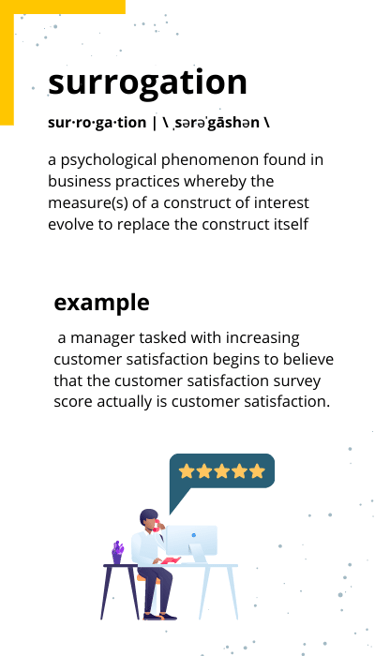 One explanation for the mess comes from Michael Harris and Bill Taylor in an article they wrote for the Harvard Business Review titled: “Don’t Let Metrics Undermine Your Business.” They say the problem is caused because people have a behavioral tendency to confuse what’s being measured with the metric being used—something called “surrogation.” In the case of Wells Fargo, employees were encouraged to chase the metric they were being measured on—cross-selling—which actually encouraged them to act in ways that actively opposed the bank’s strategy to build long-term relationships with its customers.

Of course, the Wells Fargo case is an extreme example. Not every company will find its employees performing illegal activities to try and get their bonus.

A more typical example could be sales commissions that can sometimes create misaligned incentives for people. Think about when a salesperson is more encouraged to close a sale—any sale—rather than find the best sale that builds the long-term value of the business. The incentive is for them to chase the metric that they get rewarded for rather than stick to the firm’s strategy.

For practitioners of the Great Game of Business®, you might even find this kind of behavior happening with your MiniGames™—particularly if the metrics being tracked inside the game don't exactly align with the company's Critical Number™.

So how do you go about combating surrogation? One piece of advice Harris and Taylor share is “get the people responsible for implementing strategy to help formulate it.” This becomes an effective weapon against employees chasing the wrong metric because they better understand the overall strategy of the business—they helped create it. People support what they help create.

That’s a key reason why the High-Involvement Planning™ (HIP) process is designed to engage everyone inside the business with setting the long-term strategy of the business. Rather than executives creating something that cascades from the top-down, HIP creates momentum from the bottom-up. When everyone has a voice in setting the direction and goals for the business, they can then set and track metrics that actually support the overall goals of the business.

As Rich Armstrong and Steve Baker write in their book, Get in the Game, about the HIP process:

It redefines The Game for us each year, with new Critical Numbers™, new financial targets, new challenges to conquer, and new goals to achieve. HIP is also where we leverage the business know-how we have worked so hard to create. We use this collective knowledge of our team to raise our level of thinking from ninety-day MiniGames to annual bonus plans to five- and ten-year visions for the company. The result of High-Involvement Planning is a vision and a specific plan to achieve the vision. It’s also a plan that we all buy in to, believe in, and feel empowered and ready to achieve. Everyone can see the big picture, which takes engagement to a whole new level and motivates the team even further. They know where we are, where we are going, how we plan to get there, and most importantly, what all that means to us and our future.

Want to learn more about getting your entire team involved and invested in the success of your organization?