The "Why" Behind High-Involvement Planning™ 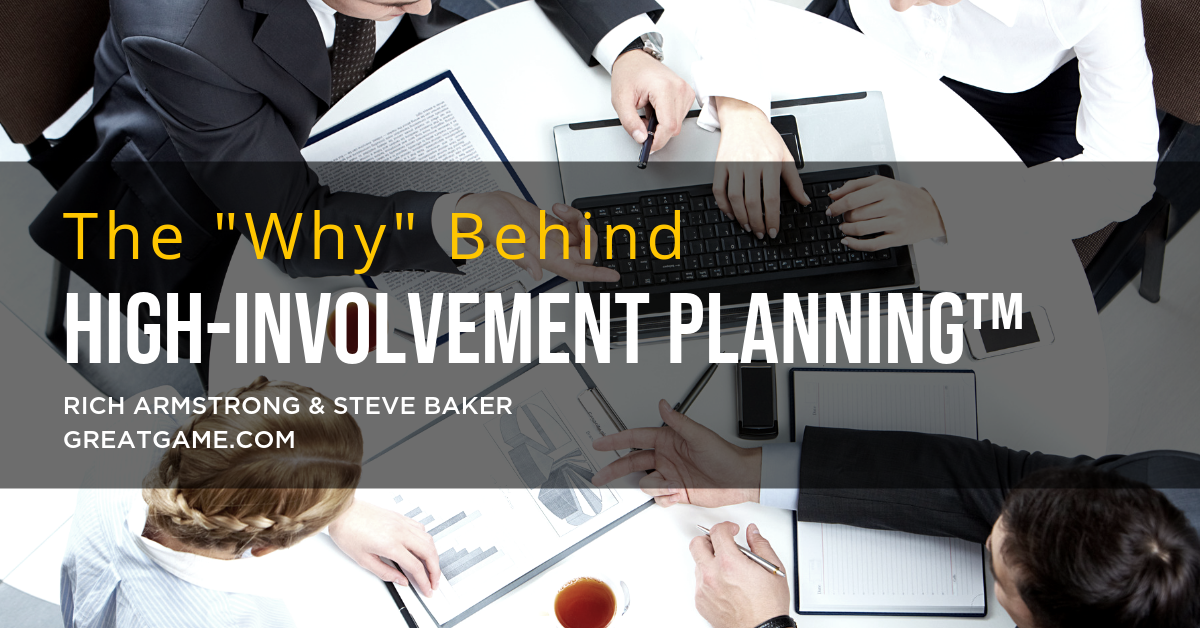 High-Involvement Planning™, or ‘H.I.P.’, has been critical to SRC’s sustainability of The Game and its long-term financial success. H.I.P. has kept us focused and committed to The Game, primarily because it keeps it fresh and exciting by changing things up, year after year. It redefines our Game each year, with new Critical Numbers™, new financial targets, new challenges to conquer, and new goals to achieve.

H.I.P. is also where we leverage the business know-how we have worked so hard to create. We use the collective knowledge of our team to raise our level of thinking from 90-day MiniGames™, to annual bonus plans, to 5 and 10-year visions for the company.

The result of High-Involvement Planning is a vision—and a specific plan to achieve the vision.

It’s also a plan that we all buy into, believe in, and feel empowered to achieve. That’s a powerful position to be in. Everyone can see the big picture, which takes engagement to a whole new level and motivates the team even further. They know where we are, where we're going and how we plan to get there… and most importantly what that means to us and our future. That’s what H.I.P. does for SRC.

It will take time for your Game to evolve to this level. But as it does, elevating your Game to the highest level will require H.I.P. Your first objective should be getting everyone into The Game and raising the level of understanding of the business throughout the company. Then, use High-Involvement Planning to leverage that knowledge and elevate and sustain The Game year after year.

In 2009, the world’s economy ground to a halt. The mortgage industry imploded—a black swan event no one saw coming—and banks stopped lending money. Everyone started chasing their deposits and concerns grew that there would be a huge run on the banks’ liquidity. No one—not economists or government officials or financial experts—had any answers about how to stop the crisis.

Then banks and companies started closing all over the world. People were glued to the news around the clock to learn about the latest casualty. It seemed like the end of the world. Even if you had a job, you wondered if you would have one the following day. The fear was paralyzing and rational thinking seemed to have come to an end.

The associates at SRC were scared, too. And for good reason. While the company had been through three prior recessions—it even got its start during the recession of 1983—this one was different. "We had never seen anything like this," says Jack Stack, SRC’s CEO. "It came out of the blue.”

The company was still in good shape financially—the details of which Stack laid out to his associates in a company wide Huddle. “We wanted to stop the shock and awe,” says Stack. “We wanted people to understand that we were fortunate to have a healthy balance sheet and cash in the bank. We didn’t have to scramble to recover and start again. We also wanted to let them know what they needed to do to control their own destiny.”

That day, Stack stated, “Today is the day we take fear out of the organization.”

Stack then laid out the company’s “end of the world” scenarios—which affectionately became known to our associates as the DEFCON steps, named for the “defense readiness condition” steps used by the U.S. military—to explain what would need to happen for the company to actually close its doors.

That willingness to confront the worst-case scenarios worked. The associates now understood where things stood—which helped ease their fears. When SRC conducted morale studies during this period of time, they received some of the highest scores in the company’s history.

The next step was to take action. They needed a long-term plan for how they were going to not only survive the recession, but also take off when the economy finally recovered. Enter the High-Involvement Planning process.

In the years following the Great Recession,  SRC Holdings was able to double in size due to discipline to the High-Involvement Planning Process.

This blog was inspired by Rich Armstrong and Steve Baker's book Get in The Game: Rapid Financial Results and Lasting Cultural Change. Find out more about H.I.P. & the step-by-step guide to implementing the Great Game of Business below.