Answers from our All-Stars: What Motivated You to Implement the Great Game of Business? 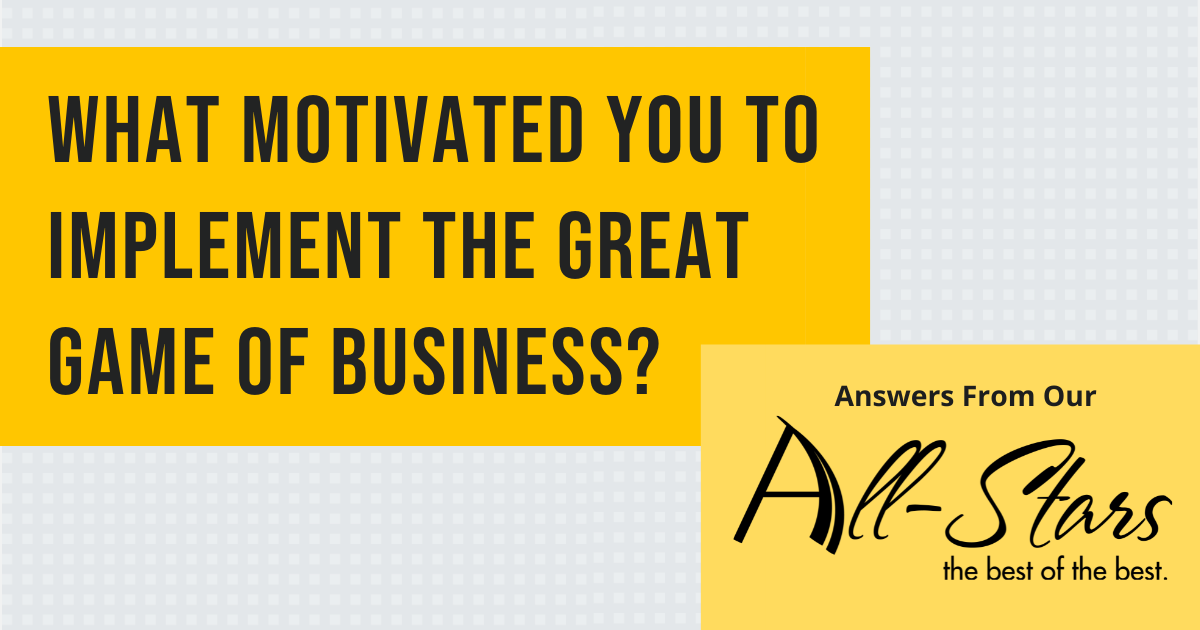 "The five partners at our firm had been trying for many years to improve overall profitability by improving gross margin. However, after more than 5 years of trying, we had succeeded in moving our gross margin percentage by barely 1%. ...Although our Managing Partner had heard for several years about the Great Game of Business, he had been reluctant to implement until reading the book. Once all of the partners had read the book, we realized that our prior efforts were missing two key components that GGOB incorporates:

• People [support] what they help create – Our prior efforts were driven by the five partners based on what we thought was best. Having the team design and roll out The Game based on what they truly understood was best for Venturity was a game changer."

"Intrust has a very open and transparent culture, and it just seemed natural to share the financial information. It always seemed awkward to have such important information hidden from the very people that can influence it so much. Also, our company road map has the company becoming an ESOP, and it is important for the employees to be fully-informed owners."

"Without a set formula, parameters or hierarchy of funding for our profit sharing program, the challenge was often left to our CEO Steve Jones alone, to not only determine how large the profit sharing pool would be, but how to break it out. The Game appealed not only for its structure but also its ability to transcend goals across departments, skill levels and knowledge. Its transparency was inherently appealing."

"Our company heard about The Great Game of Business from our EVP of Trucks, Tom Bagwell. Tom’s own father lost his furniture company to bankruptcy in 1990. At the time, Tom had no way to help him. He was too young and didn't know the numbers or the language of business. After seeing his father’s efforts lead to loss, Tom dedicated himself to never being in that position. Tom went on to the University of Chicago in 1994, where he took an MBA course called 'Management Strategies of Successful CEOs.' It was in this class that Tom was introduced to the required reading of The Great Game of Business. He couldn’t help but wonder what would have happened to his father’s business had he known what he knows now…"

"Recognizing that our current method of management and stewardship was unsustainable, the entire Amy’s Ice Creams Executive Leadership team investigated new practices for sustainable growth and engaged employees. Our vision of growth was to become a 100-year-old company, not race to 100 units. This unconventional method of deliberate and measured growth was supported entirely by Amy and the team.

"After countless meetings and program reviews, the team realized there was one system above the rest that fit their culture and the mindset of Amy’s. This system was the Great Game of Business."

"For the past 45 years, I ran my company like a typical President and CEO, only to find I didn’t know “Jack” about leadership. I organized and conducted my duties as President and CEO. My worker’s called me the “Big Boss Man”. I listened to my suppliers, financial supporters, business advisers and took to heart their advice that would solve my problem only to find out they didn’t know “Jack” about how to run a company either.

"I now know “Jack”. I love the cover of his book, The Great Game of Business, by Jack Stack. It is the only way to run a business today, once you know “Jack” you will agree that his system works. Why? I have always been told the best way to help yourself is to help others.

"Jack’s system is easy and simple. You help your team, they will help you. You teach them how to earn more money or improve your net profit and they will go to bat for you. I, for one, realize this. Making this change has doubled my sales in only 3 years and most importantly, has increased my net profit from 1.9% to around 10%, which is double what I really expected. Jack’s folks came in and explained how it worked and what I would need to do.

"In 2014 Essential Ingredients (Ei) began the search for clarity on ways that we, a 100% SCorp ESOP, could get our ESOP participants to think and act like owners. We have a
beautiful culture at Ei and felt strongly about finding ways to make that culture last with the potential to reward several generations of employees. Getting the entire team to think and act like owners was the critical part of this long-term evolution and the GGOB is the best tool out there to achieve this goal."