As a Leader, Are You Living Up to Your End of the Employment Bargain? 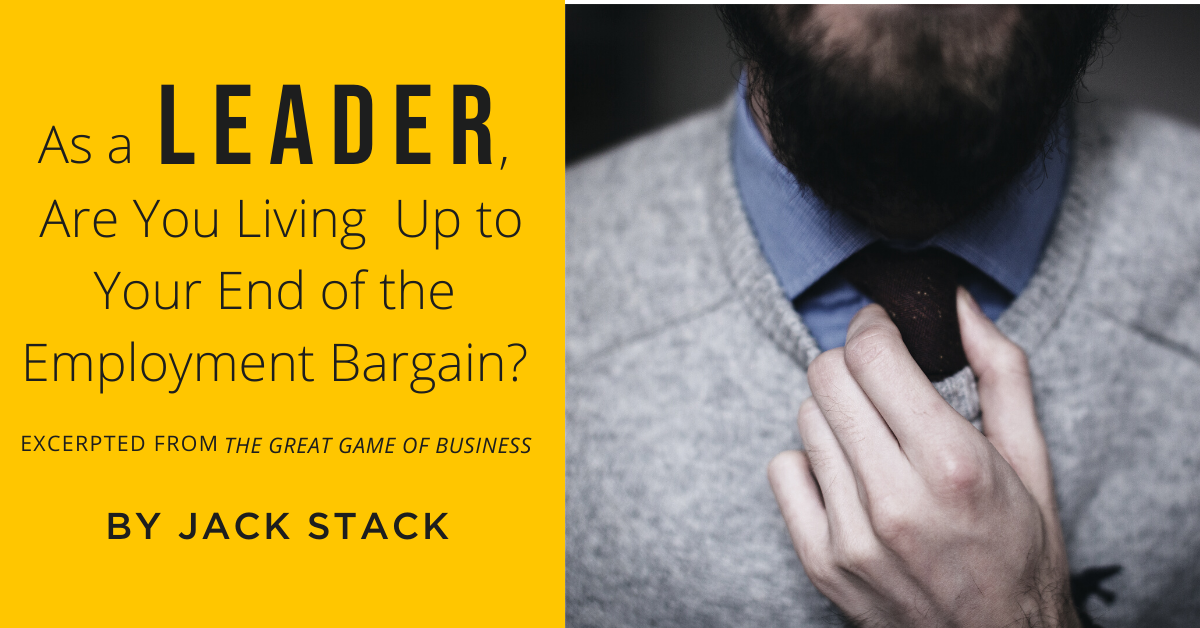 I have always believed that you take on a big obligation when you hire somebody. That person needs to bring home money, put food on the table, take care of children. You can't take that obligation lightly. Of course, the individual has obligations to the company as well. Employment is a two-way street. But as much as possible I want it to be someone's choice whether or not he or she leaves the company. It really bothers me to see people laid off through no fault of their own. To prevent that from happening, we have a contract among ourselves. Everything we do is based on a common understanding that job security is paramount—that we are creating a place for people to work not just this year or five years from now, but for the next fifty years and beyond. We owe it to one another to keep the company alive.

That's really why we started playing The Game in the first place—we wanted some degree of job security for ourselves and the people with whom we work. One of the lessons we learned from the demise of lnternational Harvester was that there is no security in ignorance. The only way to know if your job is safe is by looking at the financial statements. We had never dreamed that our jobs at Harvester might be in danger. This was a company that went back a hundred years, one of the thirty largest in the country, more than 100,000 employees. My dad had retired from it. I'd worked there for fourteen years. I just assumed my job was secure, and I had no way of knowing it wasn't, because no one ever taught me how to read a balance sheet. Then Harvester went down the tubes.

We had no such illusions, however, when we started SRC: we knew our jobs were in jeopardy from the start. To buy the plant, we'd had to come up with $9 million, of which we were able to scrape together a grand total of $100,000 from mothers, fathers, in-laws, uncles, and friends, not to mention our own personal savings. We borrowed the rest. This was like putting up $1,000 to buy a $90,000 house. You don't really own it-the bank does, and it will pull the plug the first time you miss a payment. In business terms, we had an 89 to I debt-to-equity ratio, which put us on a par with, say, the government of Poland. We were nearly comatose as a corporate entity. We couldn't afford to make a $10,000 mistake.

Looking at this situation, we realized there were two things we couldn't do. Number one, we couldn't run out of cash, because then our creditors would close us down. Number two, we couldn't destroy from within, which would be a danger if morale got bad. If either happened, we'd lose the company, and 119 jobs. Everybody had to know the company's financial pulse at every point. We had to tell people where the cash was and then make sure they were involved in deciding what to do with it. That's how The Game began.

We developed a system that, in effect, delegates the responsibility for job security by giving people a scorecard and a way to influence the score. The Game lets you see for yourself how safe your job really is and shows you what you can do to make it safer. It doesn't provide guarantees, but there aren't guarantees anymore. To tell the truth, there never were.

The original Great Game of Business book started it all, but now's your chance to order Jack Stack's latest book, Change the Game.