What a 9-year-old Can Teach Us About Life

One Saturday morning, I found myself standing and watching a Little League baseball game. I had a mask on my face and was safely isolated away from anyone else. It was so weird. But I enjoyed being outside in the sun, hearing the familiar sounds of a ball popping into leather and the pings of the bat when hitters made contact. It almost felt like the start of something new.

The game was played by a bunch of 9-year-olds, which meant you knew you were going to see plenty of errors and miscues. They’re going to drop fly-balls and let others roll through their legs. They’re still learning the game. But there was something special going on in this particular game. There was an intensity to it. All the parents and family members in the crowd were rapt with attention. You could hear a pin drop.

The pitcher for one team was really impressive. It seemed like everything he threw was over the plate. Something like 60 of the 76 pitches he threw were strikes. It was unbelievable. But his team had gotten off to a terrible start—they were down 2-0 in the first inning—because his teammates had made three errors in a row letting the other team take the lead. Believe me, I’ve seen enough Little League baseball games in my life to know what usually happens in these situations: the pitcher throws a fit. His body language will say it all. Maybe he’ll throw up his arms into the air in exasperation. He might even throw his glove into the dirt in anger. There’s likely to even be some tears. He’ll be so upset because he feels like his teammates are letting him down—and it’s their fault they’re losing the game. 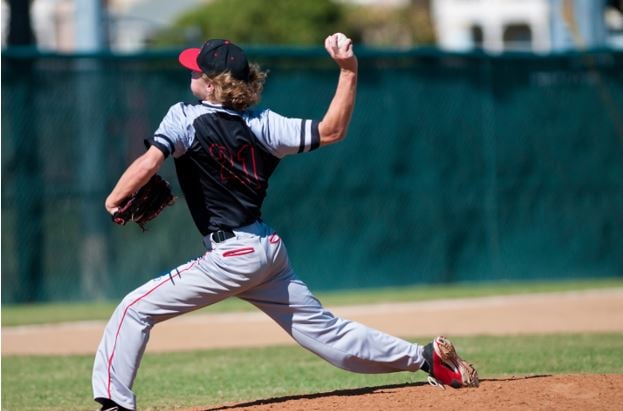 But not this kid. I marveled at how calm he was even as he watched another runner cross home plate as a result of an error—his team made six of them. He even made one himself. Yet, he never got rattled, he just kept throwing strikes.

I was shaking my head about how this kid had been able to keep his cool despite everything going wrong around him. That’s when this kid’s grandfather wandered over to say hello—from six feet away, of course. So, I asked him about his grandson: “How do you think he remained so calm while everything was falling apart around him?” His granddad looked at me and said: “Someone taught him to look ahead instead of looking behind.”

What he meant was that this kid was looking ahead to how they could still win the game—he wasn’t going to worry about what had already happened. It never occurred to him to blame anyone but himself for the situation they were in. He knew he had to take responsibility. And you know what happened? His team rallied. They scored a few runs and tied the game.

These days, games are timed: they end after an hour and 45 minutes. So here it was, the fifth inning, the score was now tied 6-6 and each team had their chance to grab the win before time ran out.

Would you believe that this same kid, the pitcher, gets up to bat and smokes a triple? You should have seen him hustle around the bases. Then, as he watched his counterpart on the mound—who we could all see was clearly rattled by the pressure—he took off down the line, stealing home to score the go-ahead run.

That’s when things got really tense. The other team still got the chance to hit again before the game ended. That meant that this pitcher had to trot out to the mound one more time to defend their lead to seal the win. Everyone was silent; it was a real nail-biter to watch. But you know what? This kid had the mental fortitude to push through, keep throwing strikes, and complete the game for the win. What a finish!

I watched him walk up to his grandad after the game and he was completely drained. He had left every bit of energy he had on that field. But he was already looking forward to doing it again the following week.

I think back to watching that kid and how he kept his composure and confidence—especially these days when the world has been turned upside down. I know it’s easy to get rattled when every day—sometimes every hour—brings negative news of some kind.

The name of the game is volatility, which is forcing us to continually work through challenges and answer new questions. When the economy, work, and communication constantly change, a lot of fear and uncertainty result. It’s really easy to lose your cool.

That’s especially true in business. The challenges that keep coming are overwhelming—which results in sadness and frustration. I find myself feeling terrible, for example, when I think about all the entrepreneurs and business owners who worked for years to build up their businesses only to face losing them as a result of something completely out of their control. It’s not their fault. Every time I hear the unemployment report, where millions of people are out of work, I feel despair.

But, just like that kid pitcher, we can’t let ourselves get consumed by the negativity. We have to pick our chins up and keep looking ahead. We have to focus on hope and opportunities. We need to move past blame and take responsibility for building our future.

That’s why we’re always looking five and ten years ahead in our business—part of what we call our High-Involvement Planning™ Process. This is how we bring the reality of the marketplace to our entire company—and what our research tells us about where our opportunities and challenges are. We’re not looking back and blaming the coronavirus because we’re 25% off our annual plan—we’re looking ahead to find ways to not just preserve the jobs of all of our 1,800 associates, but to identify areas where we can grow and create even more jobs.

Only Great Companies Make It During Bad Times

Another lesson we’ve learned from living through four prior Black Swan economic recessions is that we have doubled the value of our business five years after each of those downturns. Turns out you can often buy things—from property to businesses—at a discount in a downturn. We’re extremely fortunate as an organization because we began business planning ahead for this recession more than a decade ago. We built a war chest to do some of the same bargain shopping we had done in the past.

But, I’ll admit, when the pandemic hit and the world’s economy literally shut down in March and April, the last thing we were thinking about was buying anything. We went from playing offense with our cash to playing defense. Our top priority was keeping our people employed—and safe. Because we had planned ahead, we had the resources and the ingenuity to avoid permanent layoffs and job losses—for now. The future remains uncertain as this virus promises to remain with us for a long time.

Even with millions of unemployed, we still believe that companies will still have similar problems attracting and retaining top talent that they had prior to the pandemic—especially those companies that are currently laying off thousands of employees at a time. When things turn around, how will they be able to grow without the help of those talented people? This is one of the dangers of making decisions in the moment and not looking ahead to where you want to go.

It’s worth remembering that 67% of the Fortune 500 companies in 1983 are no longer in existence. Even weak companies can make it during good economic times. Many prosper because of the marketplace and economic growth. But it’s the great companies that make it during the bad times. We have to focus on the bumps in the road and the uncharted waters ahead. We have to ask ourselves the question, “What if we can’t do this?” That’s why we need to look ahead and calculate risk and build contingencies into our strategies to make us stronger.

We need a sense of optimism that we can improve the future—that’s the lifeblood of any organization. We have the expertise to make a lot of things. Now we need to look ahead to find ways to use that expertise to find out where the demand is so we can sell new things to the right people at the right time. It can be hard to accept reality. But by looking ahead, we can live with reality and we can make changes to create a better future.

That’s the lesson we can learn from that 9-year-old pitcher. He wasn’t afraid to stare reality in the face and to look ahead at how he was going to overcome it. If he had spent time dwelling on all the negative things happening around him, he could never have summoned the energy and the strength to push through to the end. What that kid can teach us is greatness comes from looking ahead, not behind.