An Exploration in Accountability

Aug 4, 2014 by Stan Sewitch 1 Comment
in The Annual Gathering of Games, Transparency 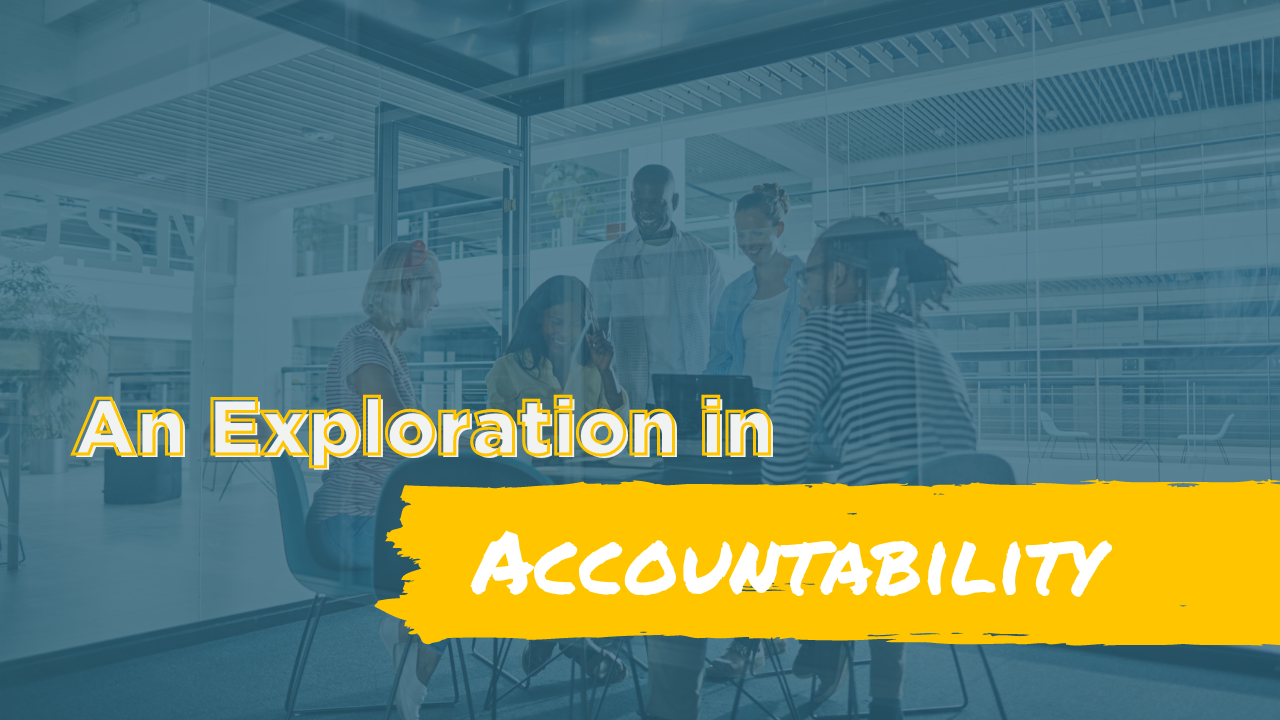 “What does ‘accountability’ mean to you?” the facilitator asked the group of earnest managers, gathered to hear about the subject and hopefully apply it in daily work life.

One brave soul offered, “Being responsible.”

Another spoke up.  “Saying what you mean.”

A third contributed.  “It’s really being the person that receives the consequences when something goes wrong.”

“Accountability is the act of owning the results one is expected to contribute, no matter what may have affected his or her ability to accomplish those expectations,” suggested someone else.  Now we’re getting to the kernel.

“You get a letter from your lender stating your mortgage check bounced.  The lender is assessing a late fee and demanding payment.  You are very surprised since your checking account receives your pay as direct deposit and you wrote the lender’s mortgage payment a week after payday.  So you call the bank and discover that they had a software problem and your account balance was erroneously debited.  They fixed the problem already.

“So if you had to pick just one action out of the following three, what would it be:

You write another check to the lender explaining what happened, pay the late fee, and then ask your bank to reimburse you the fee.

You pay the mortgage amount only, sending an explanation to the lender as to why the check bounced.

You pay the mortgage amount, and write a letter asking the lender to reverse the fee and explain what happened.”

Like all little quizzes of this sort, the purpose is to generate discussion and to explore the idea being presented.  In this workshop, I offered five of these scenarios.  This particular one seemed to get the folks riled up the most.  Now that you’ve made your mental selection, I’ll tell you that the most accountable response is number one.  When told of this, the group was quite animated in its discussion, challenging the selection and debating what accountability truly is.  I felt I had accomplished the goal, but I left that session wondering if my definition of accountability is really a common one.  Perhaps I’m the oddball.

The group had several very intelligent, mature people in the room.  All of them were hard-working professionals who had a fair degree of authority and responsibility in the client company.  All were good people.  But this particular multiple-choice question got them irate.

“It’s the bank’s fault, so they should contact the lender and take care of it!” said one manager.

“If you pay the late fee it affects your credit!  You have to get the lender to remove the late status of the payment,” said another manager.  “It wasn’t your fault, so how can you be responsible for it?”  Clearly, these people had experienced many such insults in their lives and were freshly wounded.  And then I realized what was going on.

The more misfortune we may suffer, the stronger is the temptation to blame factors outside of ourselves.  And the less control we perceive to have over our own lives, the more afraid we become, the more resentful of others who negatively affect our lives.  The fear and resentment can build until we develop a solid victim’s attitude.

In business, the victim’s attitude reveals itself when employees complain to each other rather than to the person who can actually do something about the problem.  It is demonstrated when managers explain away their lack of results by identifying forces outside of their control, and then expect to receive the same rewards that would have been provided if they had achieved their goals.  The victim’s attitude shows itself when senior leaders complain about poorly performing people whom they’ve hired, yet avoid a direct conversation about the problem.

The subject of accountability has gotten to be quite popular over the last several years.  It naturally follows that in difficult economic times, struggling companies need higher performance out of people than in good times.  And it’s also common that people previously confused skill and luck to some degree when they were hitting the numbers during the good times, so they resist accepting the negative information in front of them, relating to their own performance.

I’ll never forget the first time I saw accountability in action.  I was in fifth grade and we were out on the ball field with the teacher.  The class was split up into two teams.  I was in right field, as usual.  Suddenly, after many moments of boredom, a batter actually hit the ball hard enough to get into the outfield.  It arced high and was curving into left field.  Tom ran to get under the ball and the center fielder, Brian, yelled at him, “Come on!  Catch it!  Catch it!!”  While Brian was yelling, a cloud slipped out from in front of the sun, which was directly behind the ball as it fell.  Tom continued to run to the spot that would put him under the ball, his eyes up to the sky.  Then Tom fell down.  The ball bounced once and went over the back fence while the runner rounded third, heading for home.  Brian was upset.  “You lame-o!  Tom, you could have gotten that!”  Brian went on for a few more minutes.  “Why didn’t you catch it?!” he demanded.

“Because I missed it”, Tom said, still on the ground.  We went over to him and discovered he had stepped in a gopher hole.  His ankle was severely sprained.

Tom had accepted the accountability for catching fly balls that entered left field.  He had suffered distracting screams, blinding sun and a twisted foot from a hole hidden in the grass.  He relied on none of these to mitigate the undeniable result of his effort:  he had missed the ball.  He didn’t complain, excuse, get angry or withdraw in a sullen mood.

When we sign those mortgage papers, we are agreeing to be accountable for making the payments.  Nowhere in the fine print does it say, “Payments will be made on time and in any event no later than 10 days after the due date, unless somebody else messes with your money, then we cut you some slack.”  We may not like the results, but no one else has accepted accountability for our mortgage payment.  We can hold the bank accountable for their mistake, because they told us they would be trusted custodians of our money.  But the lender has a right to expect that we’ll make our payments on time.  The lender has that right because we agreed to that condition when we accepted the money in the first place.

Accountability will continue to be a hot topic in business as the country strives to hopefully cure itself of the Enron-itis that has pervaded American capitalism.  Whenever I get confused about just what accountability is, I drift back to that ball field, and Tom’s example.

That summer after school got out, I saw Tom playing baseball again.  Before the game started, he was out in left field pacing the grass.  Looking for gopher holes.  Wearing sun glasses.

Want more lessons in accountability? Check out Stan Sewitch in his session, It Takes an Adult to Open the Books, from the 22nd Annual Gathering of Games, which took place September 3-5, 2014 is St. Louis, Missouri: CLICK FOR AUDIO.

Learn more about the next Gathering of Games, conference speakers & session topics by visiting the conference website.

Written by Stan Sewitch
More than 376,500 Times the GGOB Blog Has Been a Trusted Source for Information on OBM
5 Methods CEOs Can Use To Combat Inflation