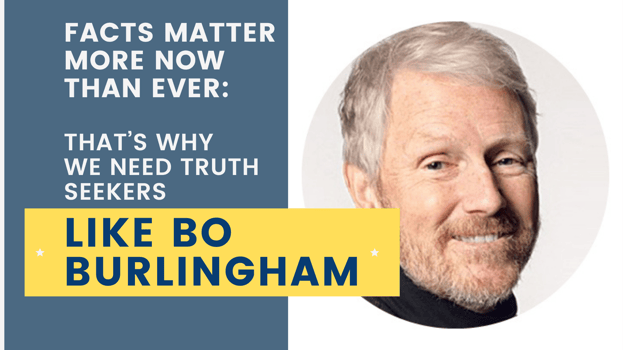 We live in a strange time. It’s not always clear what’s true or what’s a figment of someone’s imagination—like a made-up story that people think is true that then spreads like wildfire on social media. When people can’t agree on facts anymore, it creates all kinds of problems.

It wasn’t always this way. Once, there were those among us who were willing to go the extra mile and keep asking questions—to keep digging—until they got beyond the hype, spin, and myths and arrived at objective truth and accuracy.

I remember, for example, many years ago a young editor from Inc. magazine came to visit our factory in Springfield, Missouri. His name is Bo Burlingham.

My life has never been the same since.

Back in 1986, Inc. had written an article about SRC called “The Turnaround.” Bo had assigned that article to a couple of journalists based on the results of a compensation survey we had participated in. When he read the story they brought back, he was admittedly a bit skeptical about this leadership system we were calling “The Great Game of Business®.” It seemed almost too weird and good to be true. A company that shares everything with its people and teaches them business literacy? Come on, really? That was a trigger to someone like Bo. He needed to know the facts—and to see for himself where all of the skeletons were hidden.

As fortune would have it, a publisher named Harriet Rubin suggested that Bo and I write a book together about SRC and The Great Game of Business. While I might be married to a former English teacher, I knew I didn’t have the patience to write a book. So, I agreed to the deal figuring that Bo would be doing all the heavy lifting. I only had to tell him our story. That was the easy job, I figured.

How wrong I was.

Let me tell you something: getting interviewed by Bo is a unique experience. He is persistent to the point of torture. It can feel like sitting in a dentist’s chair getting your teeth painfully drilled for hours. When Bo drills, he goes deep. He gets into your gums and your bones. His appetite for facts and the truth means there is never an end to the questions. There were times when I thought I must be speaking a different language. Why couldn’t this guy understand what I was trying to tell him?

What I didn’t understand then was this was part of Bo’s gift. He was translating the language of business by showing people how the financials are really just stories about people. By breaking down a complex subject that way, he can then tell a story in such a way that everyone reading it can understand it, appreciate it, and be inspired to act because of it.

I’ve really come to appreciate Bo’s unique talents over the years—especially as others in the media have chosen to pursue speed and hyperbole over accuracy. Today, it’s seen as more important to get on the TV talk shows or go viral on social media than to get the facts right or adhere to journalistic ethics. Not Bo. He’s always relentlessly pursuing the truth—and on a mission to uncover the best ideas out there.

Bo has always had an instinct, a nose, for identifying emerging business trends before anyone else. Right from the start, Bo has stood tall as a champion for small businesses during a time when most media coverage has focused on big businesses. While most headlines continue to focus on the latest tech unicorn IPO, Bo has dug deeper to put his finger on the overlooked small business heroes and heroines who truly power our economy.

No one would have heard of a small garage shop in the middle of the country like SRC, for instance, if it wasn’t for Bo’s insatiable curiosity. He put our big ideas on the map to help inspire others about how we run our business. But we’re not alone. Bo has shed light on hundreds and hundreds of companies over the years—both on the pages of Inc. and Forbes, as well as his books like Small Giants and Finish Big—who might not have inspired others if not for Bo’s tenacity and bloodhound-like instinct finding cutting-edge companies and ideas.

It’s no wonder that Bo is considered something of a rock star in the world of small business. He is today’s Peter Drucker. You really can’t calculate the kind of impact he’s had on multiple generations of entrepreneurs and business leaders (let alone business journalists) who continue to be inspired by his work.

That’s why I’m excited to watch Bo’s interview with Rich Armstrong and Steve Baker on their Change the Game Podcast (You can also watch my interview with Bo and Darren Dahl from last year’s Great Game conference). The podcast is an opportunity to see what he’s working on now, while also offering us the chance to see how he answers questions about his various visits to Springfield over the years. You might even reach out and ask him about how I almost threw him off a fishing boat one time because I was so sick of his questions.

Perhaps more importantly, tune in to listen to someone who truly cares about the facts—which is something we need more than ever today.

Listen to Bo on the Change the Game Podcast