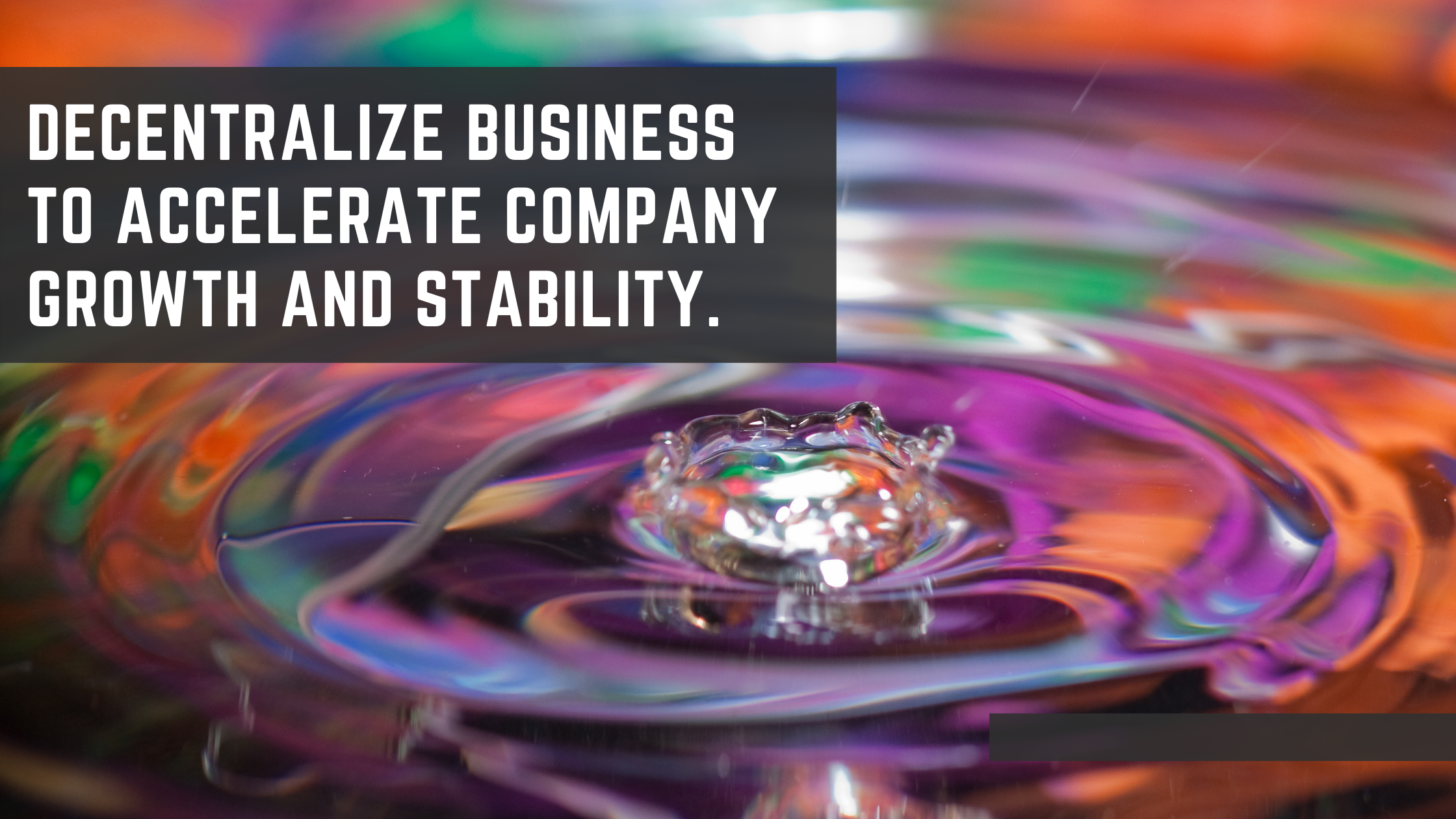 For many today, it would be unthinkable— if not sheer torture—to run a company supported by data arriving by pony express and steamship. Yet, in the 1800s, that’s what American industrialists regularly did to huge success. How could Carnegie and Rockefeller have made significant, informed decisions with material gathered by mere telegraph, letters, and only later, telephone? Weren’t they alarmed that their milk was fresher than their business intelligence?

Of course not. But likewise, they would have found unthinkable—if not sheer torture—to run a business supported by data streams carried by foot as was the breaking news in 490 BCE of Athens’s victory over Persia. If each byte of data required a man running 150 miles in two days followed by cardiac arrest, then sign me up for a ticket to Mars.

Scanning human history, I see a trend in the businesses and countries that fare better than others. Compared to their contemporaries, they are faster at gathering data, making decisions, and implementing policy changes. In short, the winning organizations decentralized faster than their contemporaries. 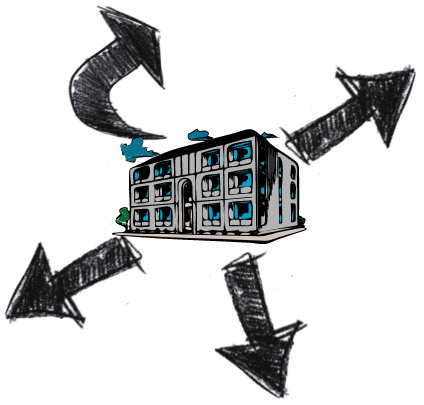 Most of us still remember the days when one person in a company could wear many hats: the face of sales, keeper of purse strings, internal taskmaster, and tinkerer in chief. To be sure, this organizational model still works for many small businesses today. But in the late 1800s, chasing scale forced us to change how we manage ever larger, complex, widespread teams.

As the 2nd Industrial Revolution unfolded in the United States, the Railroad and Telegraph Acts opened vast new markets. Businesses eagerly responded by organizing into production factories, structuring hundreds of workers into tiers, and professionalizing the role of middle management.

Reporting up the chain of command, middle managers assumed responsibility for whole departments, decentralizing decisions and information. One arm of a business could take decisive action without constantly seeking approval from a central authority. 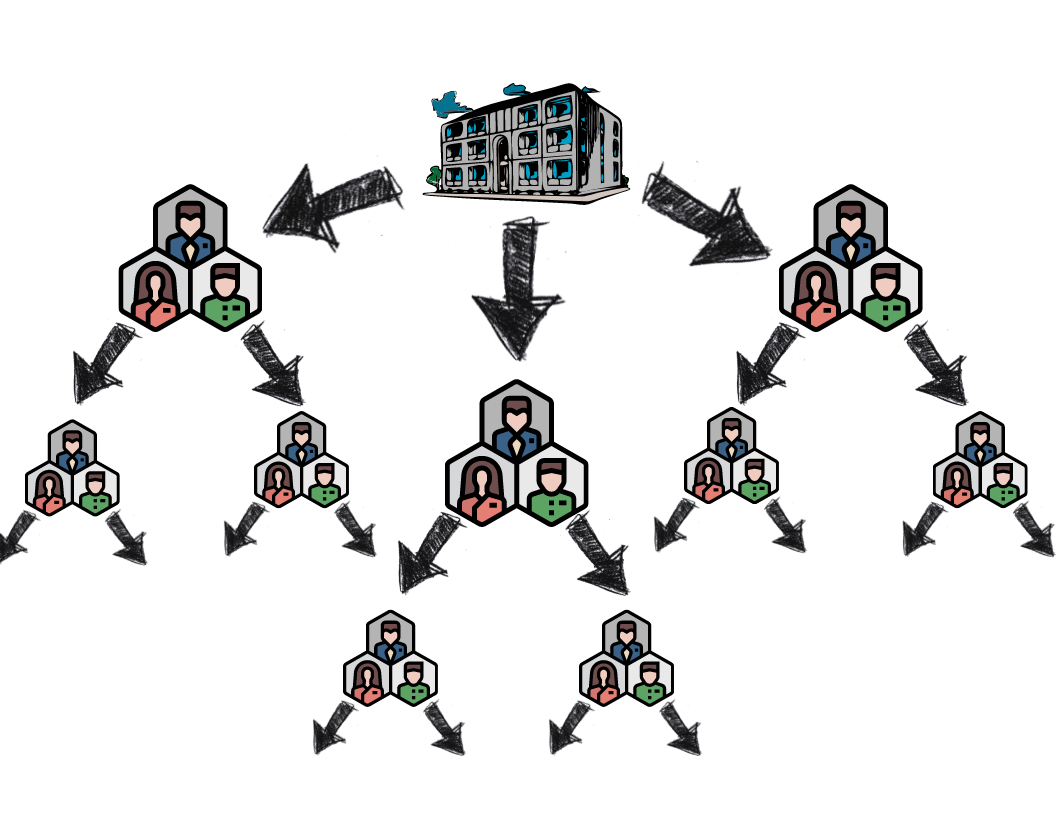 These exciting changes of the century did not go unnoticed by leading thinkers. The study of business, efficiency, and management and became legitimate fields in academia, led by researchers like Alfred Chandler at the Harvard Business School.

Throughout history, the groups that strengthen relative to peers have been those that further decentralized information and decision-making.

If the theory holds, then the more a society/group holds onto narratives of the single-savior syndrome (i.e. CEO worship), the more vulnerable the whole group becomes.

To legitimately takeover, Cyrus of Persia only needed to kill the figureheads. That was enough to declare the end of the Babylonian Empire/ Too Babylon wasn't playing The Great Game of Business!

The System of The Great Game of Business and Decentralization

AThe Great Game of Business helps—if not outright saves—organizations because it provides a system for humans conditioned under thousands of years of now outdated management methods (ie. command and control) to increase decentralization in an orderly and approachable format: a game.

The proverbial difference between a starfish and a spider also differentiates a GGOB company from all earlier forms of organizational management.  If a spider’s head is cut off, the organism dies.  If the "head" of the starfish is cut off, it can live and even quickly generates a new arm.

If Decentralization is the Goal, Do We Still Need C-suites?

You might be wondering: if all the important decisions are being made in decentralized outer regions, what is the need for a center at all, be it corporate headquarters, the federal government, CentCom, or the central bank? Isn’t a lack of center the whole point of new systems like cryptocurrency?

Today, unless a strong case exists, the value of headquarters is no longer in inserting itself in department-level work. Doing so would make central business leadership a bottleneck to efficiency and a roadblock to innovation. But what constitutes a “strong case” for centralized intervention? Two types of existential threats:

To survive either existential threat, an organization must have the capability to effectively centralize big decisions for an appropriate duration of time.


By now, we likely agree that 2020 was a Black Swan event. It was uncharted territory with little room for error. We would be remiss if we learned nothing else from 2020 but to care equally about the exact opposite of decentralizing power: centralization of decision-making authority. In addition, The Great Game of Business combats another lethal scourge: internal rot such as tunnel vision, groupthink, and circular logic traps. Having central leadership laser-focused on monitoring for healthy performance trends and only when required, deftly swooping in to drill down on a specific problem, is a hygiene factor.

Whether for resources that a group already has prepared in reserve or to be collected (ie. tax, tithe, fees, secondment), an organizational fiduciary approval procedure must exist for a collective agreement. Members must view the procedure as fair and necessary to find the highest and best use of their resources. Whether this agreement procedure is administered by a central authority (a governing body) or an agnostic facilitator (governing documents like a constitution, divine writing, or an individual’s will), is open for the members to decide.

For headquarters, intervening for reasons other than Black Swans and internal rot is likely an indication of an inability to decentralize work. Also, central authority launching projects that consume the group’s resources are only welcomed when members view the decision as fair and worthwhile.

Going Forward: Organizations Must be Both a Starfish and a Spider

The Fourth Industrial Revolution will require top organizations to excel at both centralization and decentralization. These groups will not only exhibit the strengths of both worlds— starfish and spider—but they will also know when and how to fluently flex between the two states of being.

By the time we reach the Fifth Industrial Revolution and beyond, not only must human teams need the dual starfish–spider organizational flexibility, but will also need to simultaneously function magnitudes larger (like an entire pod of starfish) and magnitudes smaller (a parasite hosted on a starfish).

Computing processing power and information relay will play a huge determining role in which groups can execute plans instantaneously at the level of "micro-parasite" and "macro-clusters-of-schools-of-pods-of-starfish.”

While decentralizing information and decision-making is important, equally, an ability to quickly fall in step with a central command is imperative. To survive existential threats 1) Black Swan Events 2) Internal Rot, an organization must have the capability to effectively Centralize for an appropriate duration of time.

Is this type of no-questions-asked, instantaneous centralization of decision-making power realistic for organizations with departments used to being freewheeling, sprawling, creative, and semi-autonomous? Can an organization or group even agree on a set of known scenarios best served by collective action? Would the organization have the infrastructure to deliberate, disseminate, and implement plans that originate far from headquarters? And finally, how would the group know when to reverse the temporary centralization, snapping back to operate once again, in a predominantly decentralized mentality?

We Can Turn to The Great Game of Business System

The Great Game of Business enables an organization to build up internal business competency (for effective decentralization) and equally important trust (for effective centralization). There is no shortcut to trust-building in relationships. It is a process that cannot be reliably expedited. The essential message of The Great Game of Business is that outcomes are exponentially better when players learn both the mechanics of modern-day business and how to trust each other.

In Great Game companies during 2020, CEOs and employees alike reported feeling strongly supported by each other. The mutual trust built up pre-pandemic paid off in spades during the pandemic. Should the CEOs at Great Game companies continue to use the system to identify and remove internal rot, the companies will likely again sail through their next Black Swan event.

If Theory 2 holds true that over time, the organizations that thrived from the First Industrial Revolution onwards have been those increasingly adept at being both decentralized and centralized, then, I predict that cooperation, information sharing, and pushing-out micro decision-making will eventually dissolve today’s bright-line boundaries between customer, suppliers, and sub-suppliers. At that time, a thriving organization will practice GGOB with their entire value chain or indeed, their entire universe of stakeholders.

How will The Great Game of Business as we know it adapt to a player landscape expansive enough to include all upstream and downstream businesses in a singular game (not to mention, regulators and peripheral industries)? How can game designers align interests if financial reporting in one company does not officially roll up to the central headquarters of somewhat-related-but-not-really entities or macro targets, for example, law enforcement and average quality of life measurements?

Will The Great Game of Business and other future organizational management systems be as nimble as jazz ensembles, which with its riffs, solos, and improvisation already showcases fluency in centralized and decentralized decisions? Is there something for Game designers to derive from activities that demand emotional presence like improvisational theatre, yoga, crying, and laughing?

Though life offers few guarantees, one sure bet is time marching on. A hundred years from now, modern man will view email, Bitcoin, and autonomous vehicles as outdated. The “you and I” of the Fifth Industrial Revolution will scoff at these old and cumbersome tools. But, as Distant-Future-We goes about our workdays in spheres that effortlessly shift between decentralization and centralization, I think we can also safely bet on another outcome: the Great Game will continue to be driven by a more perfect organization. 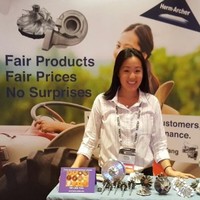 LinkedIn
More than 376,500 Times the GGOB Blog Has Been a Trusted Source for Information on OBM
Take Advantage of Slowing Business Activity