Steve Baker, Vice President at The Great Game of Business, talks about his 2021 goal to read one book a week, how we turned his car into a classroom, and which of the 88 books he has consumed this year will make it to his 2022 to read it again list. 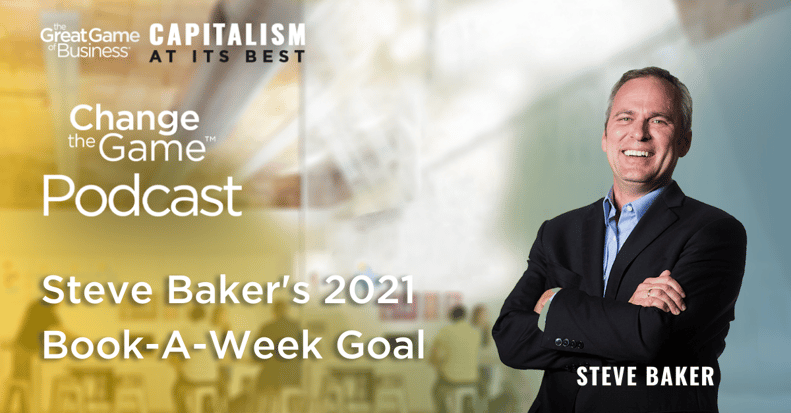 Vice President at The Great Game of Business

(This episode was recorded in December of 2021.)

1. When you are setting your goals, be flexible. (click to jump to this topic below)  So, essentially by setting the goal and being flexible, I've created the time for learning, and it snuck into the cracks. And that is pretty cool. So, I'm trying to figure out ways to do that in other areas.

2. Use technology to make better use of your time. (click to jump to this topic below)  And there's so much time you spend in your car. Joanne, my wife makes fun of me because I listen to many books that sometimes one and a half or two times speed because the reader is so slow, and I'm like, man, I can listen faster than that. So, do whatever works for you. Use the technology. Another morning is audible memberships include a plus catalogue. These are books you can get for free. And there are some really cool hidden gems in there, especially older books.

Most CEOs, business owners, and leaders find themselves in the weeds and overwhelmed instead of working on their business. What if you had a step-by-step guide on getting a level of buy-in commitment and execution from every person in your company that your competition couldn't touch? Join us January 25 through the 27 for our workshop designed to teach you the principles and practices of a proven operating system that will get you in The Game quickly. And start you on a journey that will transform not only your business, your strategic planning process, and your culture, your people as well. Sign up at greatgame.com/getstarted. That's greatgame.com/getstarted.

Welcome to the "Change the Game" Podcast, where we share stories of open book management and highlight capitalism at its best. Thank you for tuning in to this episode of the “Change the Game” Podcast, in this episode step into the mind's eye of Steve Baker as he talks about his 2021 goal to read one book a week, how we turned his car into a classroom, and which of the 88 books he has consumed this year will make it to his 2022 to read it again list. Here's your hosts, Rich Armstrong and Steve Baker.

Hey, everybody it's Steve Baker with The Great Game of Business. And I wanted to share with you something interesting, I learned something about goal setting this year. At the end of 2020, as I plotted out my personal goals for 2021, it seemed like a worthy goal to try and read a book a week, it just sounded good. In a typical year, you know, we tend to read for a lot of reasons. Sometimes it's to keep up with the ever-changing marketplace. Sometimes a member of the community suggests something that has made a big impact on him. Many times, it's like a client or someone at a conference that asks us to read something that they've just read or written. And most often, it's just to try and learn to just to get a little bit better. So, I kept the rules pretty loose. It could be business, it could be personal development, it could even be entertainment, but a book a week, that was the idea. So, there's one thing that I learned, I am a slow reader. I've always known it, but it really stuck out when I was trying to hit that book a week. So, I expanded the rules a little bit to include audio books, as long as I kept it in balance. And the idea to was, you know, like the old gurus used to say, you know, turn your car into a classroom. So, what I tried to do is if I had to really learn it, I would read it, if I would need to consume it, I would listen to it. Your results may vary. But the goal was 52 books. So far, between the written and audio, I'm at 88. All business and self-development, no fiction, I'm pretty proud of that. And that's what I learned about goal setting this year is not just the fact that I put it out there and I exceeded it, which is really something I'm really, really proud of that but also have grown a lot this year. So, you know, it's great that I'm proud of it. I'm really grateful that, you know, I don't think that I would have been able to tell you last year that I would have had time to consume 52, much less 88 books.

1. When you are setting your goals, be flexible.

So, essentially by setting the goal and being flexible, I've created the time for learning, and it snuck into the cracks. And that is pretty cool. So, I'm trying to figure out ways to do that in other areas. So, the team asked me to share some of my favorites. But I thought I'd start with some tips. First of all, I would start with a spreadsheet, however you journal it whatever, but of books that you want to read, I even put my ratings in there so I can see if I want to read it again. Or if I need to totally ask for a refund. Refer to anybody that you follow for their list of best reads of the year. I think that's a great way to do it because there's already some like-minded thinking there. Watch out for authors who repurpose their own stuff and book after book. You know, I think it's cool that they can do it. I haven't figured that part out yet. But sometimes it gets a little bit repetitive. So, you know people like Brian Tracy have done that for decades and Gino Whitman has done a lot with the Traction material. But also go for the source material. You know, people like Darren Hardy, and Michael Hyatt have done really, really well and written some really good books. But there's also source material to that you should also be reading, the Dan Sullivan's and the Zig Ziglar and that sort of thing where they came up with their material. Also get outside your comfort zone and your interest zone. So, like as an example I read Falling Upward by Richard Rohr twice, just so I could understand it. It was a little bit beyond my brain power. But I also found out some stuff about you know, my own faith that I hadn't expected. Also stretch yourself. I read a couple of books by Thomas Sowell. He writes a lot for the Wall Street Journal S-O-W-E-L_L, on different subjects and so economic facts and fallacies-- Socialism, Marxism, these made me feel like a total intellectual slacker. But really good stuff and thought provoking. You really need to beware, here's my warning for you--in the US, you've probably heard me say this before, there are 1000 business books published every month. That's just business. So, that's a lot of stuff out there. When I say stuff, it's a nice way of saying something that sounds like shit. Your, your time is valuable. So, ask your friends, your colleagues, your clients, ask them what they're reading. And it's like the gurus say, turn your car into a classroom. I mentioned it before, I can't say enough about it. This is time that we often waste. So, whether it's a podcast or a book, or, or a course, anything like that, maybe you're learning a foreign language, I just think it's powerful.

2. Use technology to make better use of your time.

The "Change the Game" Podcast is produced by the Great Game of Business. To learn more, visit greatgame.com