Anthony and Liz Wilder believe in the power of embracing transparency and opening their books. “Our approach to open-book management is the foundation of our ownership culture” says managing principal Anthony Wilder. “Profitability is part of our plan for success and we plan to use our success to make a difference in the world.”

They took that commitment to another level in 2006, when they began playing the Great Game of Business. In fact, they played the game so well they were named an All-Star in 2009. The company was thriving, with a full-time staff of 30 people and annual revenues of about $7 million.

And then the Great Recession hit.

The housing and construction industries were devastated across the country. But Anthony Wilder survived. In fact, the company more than survived. While it did cut pay for employees, the firm kept their team intact and were well positioned to tackle projects as the economy turned around.

“Because of GGOB and the scoreboard, we were able to foresee the oncoming recession” says the firm’s president, Liz Wilder. “We held the team together by encouraging our employees to think and act like owners. We all focused on our critical number and understood our scoreboard, which allowed all of us to be more efficient and informed — and ultimately more successful.”

Today, sales at the company – which continues to teach financial literacy to every employee – is projecting 15% year over year growth. But thanks to the collective wisdom of the team, the company is also expanding into new markets like interior design and home maintenance as ways to diversify and better prepare itself should another downturn roll around.

“The Great Game of Business has inspired every person in our company,” says Liz Wilder. “It has pulled us together because we have one common goal. We’re all pulling for the same thing, which has created a trusting culture where each person takes ownership and responsibility for our success as part of their duty. Our participative leadership engages every member of our team because we know people support what they help create.”

“Practicing the Great Game of Business has become an integral part of our culture. It’s part of our ‘religion’ at Anthony Wilder. All employees understand how their actions affect both gross profit and net profit, and how they affect the success of the company. Beyond accountability, it fosters a culture of trust and confidence in the company and the team – it helps every employee see the role they play in creating and maintaining a profitable, sustainable business.”   ~ Danielle Frye, Director of Marketing 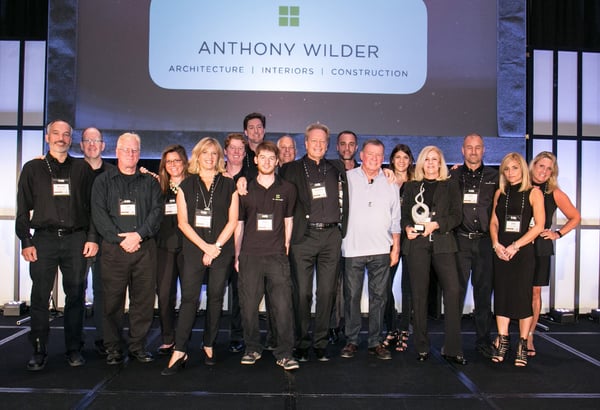 With the recession in the rear view mirror, the team at Anthony Wilder has continued to elevate their gameplay across the board – particularly when it comes to their regular huddles and scoreboard updates. One of the areas they have invested resources in more recently is in the practice of High Involvement Planning.

“I’m excited about how HIP will help chart our success, in terms of helping us identify what we need to do in the next three to six months to put us on target to hit our objectives over the next three to five years,” says Wilder.

“People take pride in the numbers they bring each week to the company huddle. Other departments share in the excitement – a rising tide raises all ships. When numbers are down in one area, people in other departments ask how they can help. When numbers are up, people want to know what they can do to keep a foot on the gas pedal and help the company grow. Everyone volunteers to be part of smaller committees and work groups that are formed to help the company achieve short and long term strategic goals. The bottom line: each person has a voice here at Anthony Wilder, and when we are all working towards the same clear goal that voice is a powerful force.”   ~ John Clark, AIA, Architect

The team’s shared success has also led to another big step in the company’s evolution: on July 1, 2016, Anthony Wilder became an employee-owned business when the Wilders sold 27% of the business to their employees.

“We didn’t do an ESOP,” says Wilder. “Employees had to come up with personal funds to purchase their shares. This significant step would not have been possible without the encouragement and motivation from our GGOB coaches and from playing the Great Game of Business.”

Sharing ownership has been a long-term goal for the Wilders, who eventually plan to sell 100% of their company to employees.

“Every team member at the firm acts as an owner, regardless of their position. Anthony Wilder is filled with efficient leaders who know their area of expertise and are willing to share it with others,” says Wilder. “Our leadership style and entrepreneurial open-book management approach encourages the expectation that as a member of the team, you are integral to outcomes and outlook.”

“As the youngest member of the team and arguably the most inexperienced, GGOB has personally helped me achieve financial competence. The knowledge I’ve gained from the financial training I’ve received here at the office has helped improve my understanding of our business and allowed me to develop a greater sense of financial responsibility, which I apply to my everyday life. I’m proud to work for a company that is interested in practicing financial transparency and encouraging its employees to become educated on its financial well-being.”  ~ Aldana Caceres, Production Assistant