Superior Restoration primarily provides water and fire restoration services—though it has more recently added coronavirus disinfecting and sanitizing services. The company was founded as a mobile carpet cleaning service in 2010 by Skylar Lewis before he later pivoted to offering higher-margin restoration work.

Even when he first started his business, Lewis dreamed of having his employees take over running the business. “I wanted them to have that ‘Own It’ attitude,” he says. To do that, he focused on building a culture that emphasized empowerment and autonomy. But he recognized that the team was missing something: transparency and literacy around the financials. “They were flying blind,” says Lewis.

After connecting with another restoration company in Chicago, Lewis learned about The Great Game of Business® (GGOB). He quickly moved to hire his coach, Kevin Walter, and kick off playing The Game in the summer of 2019.

Lewis says that his team immediately took to embracing the financials of the business. “There was almost zero friction in making the transition other than the typical learning curve around learning the numbers,” he says. “One of the first things GGOB helped us with was cutting costs, which really helped improve our profit margins.” Lewis says margins doubled from 4.8% to 10% within just a few months. Today, margins are closer to 15-16%—which has helped Lewis implement a gainsharing program for employees for the first time in company history. With that kind of success, Lewis has been even more willing to delegate decision-making to his team—to the point where he now works just two days in the business. That’s freed him up to spend more time on building his passion projects, a training program for men called “Rise Up Kings,” and writing his book, The Two Day CEO. “GGOB has allowed me to have the freedom to pursue my passion,” says Lewis.

While one Superior Restoration employee did test positive for the virus, the company has continued to operate throughout the pandemic. And Lewis credits playing GGOB for the fact that they have been able to keep their entire team intact and engaged. “We had an ownership mentality before we began playing GGOB,” says Lewis. “But we’ve ratcheted it up to another level. It’s not even close.” Keeping their weekly huddles—albeit virtually—played a key role in keeping the team informed and connected. “Before GGOB we met once a month at best,” he says. “Our huddles were critical in keeping everyone aligned and motivated.”

“The Great Game of Business has made us a stronger team. I look forward to engaging with my teammates every Wednesday for our GGOB meetings. We’re all responsible for the P&L, we cheer each other on when we have wins, and we are always collaborating to improve and be better. It’s been really incredible to see how well we’re doing as a company. Having that financial transparency in the office has increased the company’s profits but it’s also boosted our company moral and the company culture, even more than it was! I’m so grateful and honored that I get to be a part of a company and team that utilizes The Great Game of Business. It’s been amazing to experience these changes and growth the last several months! I’m excited to see how much more Superior Restoration grows because of this and because of the hard work the team puts into their line items every day!”

One MiniGame the team successful completed was called “Referral Roulette”—which was aimed at driving referrals from their current clients. The stakes were high, given that landing seven new jobs equates with $30,000 in new revenue. In the end, the team nailed its goal—generating 39 new referral sources in 60 days—which won them a Casino Night as part of their annual Christmas party.

Two areas Lewis would like the team to focus on leveling up in the coming year is getting better at mastering MiniGames and driving more financial literacy training to help the team improve the accuracy of its forward forecasts.

“GGOB has had a very positive affect on our company. We already had what I would consider to be a good culture, but GGOB seems to have brought people even closer. It’s a rallying point and something we all pull together for. Everyone cares about our numbers, and we all push for great results. The gain share carrot is a fantastic way of creating unity.” 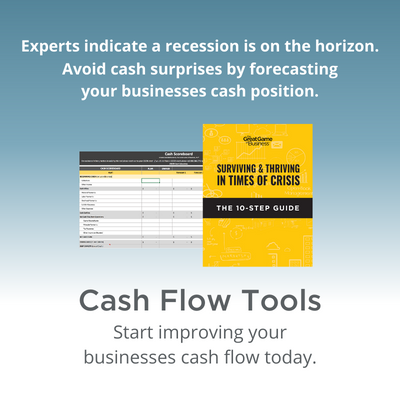