Mid America Metals got its start when Donat, who had earned his chops in business working at a large auto dealership in Chicago, teamed up with his two brothers, who were both metal refinishers, to start their own business. “We started out of the back seat of our car,” says Donat, about his business which performs services like removing a scratch from an elevator
door, honing and polishing a lobby floor, or restoring a building’s wooden accents. When Donat bought out his family members five years ago, he wanted to build a common core or culture for the company despite the geographic differences that separated his associates. He turned to the GGOB for help and 2014 was the first year where the entire company was engaged in financial literacy training, huddling, and forecasting.

Mid America Metals is structured so that it has 9 offices spread around the country based close to its clients. But the widely distributed workforce was suffering from a lack of financial literacy – which impacted them both at work and at home. “We had heard rumors that employees were thinking the company made a 70% profit,” says co-founder and CEO Dale Donat.

Open the books and implement a financial literacy program to help associates understand how the business operated and how the different geographic regions impacted the bottom line. “After we opened the books and they saw the real numbers they came to appreciate the challenges businesses face just to make any profit,” says CEO Dale Donat.

Associates at Mid America Metals now attend monthly financial literacy classes that show how their personal finances correlate with how the business runs. The classes use football-themed games that are broadcast over a videoconference system that allows the company’s different offices to compete against each other. “This really brings our field offices together and makes financial literacy fun,” says Donat.

By participating in the training, associates are then eligible to take part in the company’s profit-sharing plan. “Now that there is a Stake In The Outcome for our employees, everyone is concerned about our Profit Before Tax (PBT) goal,” says Donat. “Whereas before the GGOB came along the average front line employee was not concerned with it and probably didn’t even know what PBT meant!”

As the company has rolled the GGOB out across the country, it’s begun to ramp up other aspects of the system, such as using a variety of MiniGames to help shore up weaknesses. “We put a lot of focus on these games and it improved and refined our operations,” says Donat, who points to one MiniGame that helped the company reach a goal getting their gross profit above 49%. “It was neat to see tangible results from these games. You can see on the scoreboard where you start at, and then at the end of the game how much you have improved. The bottom line is that the employees all feel more engaged and part of the company at every level.” 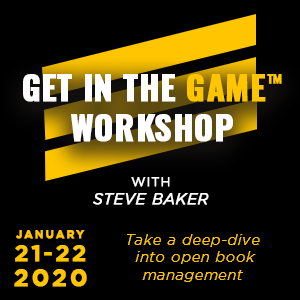