How's Your Compensation Plan Holding Up? 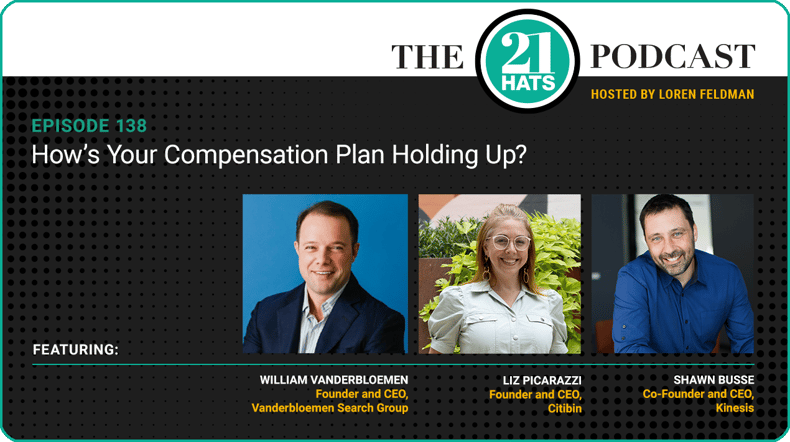 This week, Shawn Busse, Liz Picarazzi, and William Vanderbloemen discuss what it’s been like trying to make sense of employee compensation in a time of COVID, the Great Resignation, inflation, and a looming recession. Shawn’s business model is evolving, and he’s trying to adjust his mix of employees to fit the new model with as little disruption as possible. Liz is expecting a year of big growth and is assessing how that will affect her staffing needs—especially as she introduces new benefits, including health care. And William is trying to create a more sustainable compensation structure while also breaking his employees’ expectation that they will always get a year-end bonus. Plus a listener asks: What tasks are the owners still doing, even though they know it’s not worthy of their time? (Aside from participating in this podcast, of course.)

The idea of an expected annual bonus is terrible for an organization, because there are going to be years where you can't make that. That year you can't make it, the level of disappointment is just so high. It's crazy.

Shawn Busse:
Man, my experience so mirrors what you just said there, William. You know, in the early days, you don’t pay people very much. If you do well, you throw a bunch of money at them at the end of the year. And I’ve learned over time that that idea of an expected annual bonus is terrible for an organization, because there are going to be years where you can’t make that. That year you can’t make it, the level of disappointment is just so high. It’s crazy.

And like you said, we pay people so much more now in annual salary than we did when we had the low salary plus a bonus kind of idea. And what’s interesting about it is, I think it’s shaped us as a more calm company: A lot less drama, a lot less turnover, a lot more mature employees. And I’ll take that any day. It’s just so hard to go from one to the other. But I feel like you have to, because otherwise, you’re just like chaos, right?

Steer clear of bonus entitlement with a gain-share system that only pays out bonuses to employees after the company has reached a pre-determined threshold of earnings. Employees are able to watch the needle move and know how much, if any, of a bonus to expect ahead of time.

Small businesses who have a small number of employees can use a PEO to keep insurance rates from jacking up and max loads from occurring after one employee has a big claim.

Loren Feldman:
Liz, William referred to the challenges of getting up to speed, in terms of introducing new benefits, like health care, as you referred to. Do you have any questions about that?

Liz Picarazzi:
Yeah, I mean, I would love for there to be some sort of a service or platform that’s like a one-stop shop where I can get health insurance, life insurance, anything with 401(k), all handled together, so I don’t need to have different providers for all of that. As you guys know from me talking on here, I hate red tape. I can’t stand administrative work. So the idea of having like four or five new providers to the business that need to be managed, and looking at the pricing every year as we do with other types of insurances, it’d be great to have the one-stop shop.

William Vanderbloemen:
So, Liz, I can share, I went through the same heartache, bellyache, headache, the whole thing. And you’ve got eight employees, and it was probably when we had three or four. The reason I got that heartache was we had three or four, and we were doing a policy through just the guy who handles our insurance personally. And then Adrienne had an allergic reaction to something. We were at a Halloween party for kids.

William Vanderbloemen:
Yeah, sorry. So she was fine. It was no real health scare. But man, she blew up like a balloon. She looked like a character in a Dick Tracy cartoon. It was awful. And it was terrible. She’s like, “Do I look bad?” And I’m like, “Those jeans do not make you look fat. Really. I promise you.” It was awful. And so the net-net was, there was no cause for it. She spent two nights in the hospital getting it calmed down. She was fine, never in danger. But the next year, our health insurance rates went up 67 percent. They maxed out.

William Vanderbloemen:
And you know, it’s all gambling. We only had four people, so if you have one big claim, I’m like, “Ugh!” You probably know this, Liz, but we went to a PEO. So like, Insperity is the biggest one. And it started as Administaff. Ironically, it was Adrienne’s across-the-street neighbor in Houston who started Administaff, and the PEO basically charges you a little more than you would get charged. And Loren, maybe you or Shawn can explain it better, but you essentially lease your employees to Insperity, and now they’re part of a 2 or 3 million-person employee force that negotiates with the insurance carrier so you don’t have those max loads happen. I mean, we had life insurance, we had pet insurance. There’s a little bit of a tacked-on fee. It is more expensive, but if the headache is the driver for you, you might consider a PEO.

Regularly reviewing the roles your company offers, defining those roles, and adding positions based upon the growth your company is expecting to see can avoid hiccups. Reviewing and editing the company's org chart will help ensure the organization has the correct amount of staff on hand and will warrant smoother transitions as the company experiences growth.

Liz Picarazzi:
Yes, yes. Last year, I didn’t do much planning around growth, as we grew. So I want to be more diligent about it this year. And also, it gives me a chance to look at all of the existing roles and see, “Does it make sense, the distribution? Where do the next roles need to be?” So I am using this as a chance that, maybe once every two or three years, I really look at the organization and see what needs to move, what needs to be added, what needs to be removed. So I’m not being very concrete about it now, but that’s because I just started the exercise last week.

And I actually had a couple of my team members present an org chart to us a couple of days ago on, “If we doubled the company, where would the new roles be? And what would they be?” So we were off in Japan in December, and I had to give them some sort of big-thinking activity. So that was it, and they had some really good ideas. There were a couple of surprising shifts. You know, I’m not hands on. I’m not in the business and not dealing with the warehouse, or with the tariffs, or any of these things. So I’m seeing what is the nitty gritty of what various people are doing and how some things don’t make sense the way they’re done. I’m seeing this as an opportunity to make roles a lot more clear, as well as to create a growth path for employees to be promoted into other roles.

Learn how to review your org chart, determine upcoming leaders, and formulate a plan that ensures the company's future success.