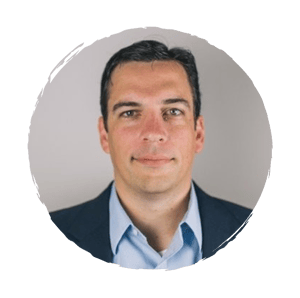 Mike Finan is a Founder and Vice President of Business Development for TGG Technologies, a startup focused on licensing of TGG’s patented sustainable high-strength pallets and related packaging. Prior to establishing TGG, Mike served in executive roles for SRC as the GM of SRC Electronics and Ciona Technologies; a joint venture between SRC Holdings and John Deere.

Early in his career, Mike had been selected for Leadership roles at one the major US based broadcast and film organizations. He found himself in charge of an array of diverse and interesting projects mostly supporting Sports & Olympic related broadcast events. Mike found himself progressing through ever-growing operational and fiscal responsibility but felt a growing and critical gap in his connection to the organization. More and more he asked if his efforts really mattered all that much?

Mike’s much-better-better looking- smarter-wiser spouse (and Springfield native) Tricia, passed on a book that would forever change Mike’s expectations for what a business should be… Open, Honest and Engaged. Mike read the Great Game of Business cover-to-cover on an international flight taking him to the latest broadcast event. To say he was Hooked on the Culture coming from the pages would be a gross understatement. A quick phone interview, arranged by Mike’s Springfield based in-laws, and fourteen months of begging for a job, SRC found Mike a home as the 4th employee of their latest startup, Ciona Technologies, in February of 2011.

Mike spent his first two years helping Ciona get going, before being surprised on New Year’s Eve of 2013 with an offer from SRC Holdings to take over as the General Manager of the fledgling startup. Two days later he got the call that the job was his... in all cases Mike was TOTALLY unprepared for the role… and in retrospect that’s probably what made the Open Book practices work so well. The young GM needed Open Book principles and committed as much to the 20+ souls working for him. Quite literally, he needed everyone thinking and acting as if they were in his shoes… acting like Owners! Mike’s commitment to the Ciona team was that no matter what he would be Honest with them… Good, Bad and Ugly. The business results were really, really cool… but seeing the lights turn on for the Ciona associates, at a personal finance level, was without a doubt the most rewarding part of the experience. Quite literally Mike watched people get control of their personal finances and work their way out of some BAD situations.

In 5 years, the Ciona team successfully grew until it was sold to the JV partner in 2016. Ciona launched 133 products, created 55 jobs and sponsored continuing education for 15 of those associates. Ciona achieved an average revenue growth of 54% year-on-year and contributed multiple millions in partner distributions.

When Mike left SRC, it was an absolute “no-brainer” to return when invited back as an Executive Coach. Mike has continued to be a practitioner of the Great Game of Business since 2011.

Mike achieved an MBA from the University of Arkansas, graduating with honors. Mike is also a graduate of Southern Methodist University with a B.S. in Electrical Engineering.

Mike is married to Tricia, his lovely much-better-better looking-smarter-wiser wife… she’s also tougher... Mike has two spunky kids Trip (11) and Lexi (8) … Trip will be a pro-golfer some day and Lexi might just take-over the world.